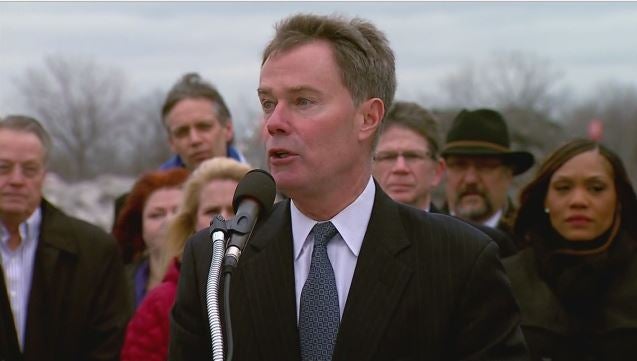 INDIANAPOLIS (WISH) — Mayor Joe Hogsett and other city leaders announced Tuesday that the city plans to build a massive criminal justice center — including a new jail — on the city’s southeast side.

But there are still key questions left unanswered about how to pay for it.

Estimated costs for the project range between $300 to $600 million, according to city officials familiar with the project, but they caution it’s hard to say at this point.

A full timeline of the schedule can be found here.

The new justice complex will be located on the site of the former Citizens Energy Coke plant, which has been shuttered for years.

“Here we’ll ensure two things: one, that justice is served, and second, that those who need help will receive it,” Hogsett said.

Tuesday’s news conference follows the mayor’s announcement in December about major criminal justice reforms in Indianapolis. His idea is to not only change how we police but also how the city treats criminals and digs at the roots of crime.

Hogsett said the new complex “will reflect how the city values the well being of its residents.”

Others who praised the project say it will help inmates gain access to mental health treatment, create jobs and improve connectivity to the city in an underserved area.

Demolition work is underway at the site.

Twin Aire residents say the conversations between mayor and area residents picked up steam this fall.

Some have expressed mixed feelings about having a jail located in their neighborhood, but community leaders credit Andy Mallon at the mayor’s office with quelling the concerns.

“That’s the problem people just hear jail, they don’t see the full picture. After they listened to Andy, I don’t think there was anyone who said, ‘I don’t want this in my neighborhood’ or ‘this isn’t a good idea,'” said Jeff Sparks, the chairman of the Twin Aire Ad Hoc Committee.

Twin Aire resident Iran Bolin, who lives less than a quarter mile from the proposed site, told I-Team 8 that he has no concerns about a new jail facility being located in such close proximity to his house.

“As big as we are we should have a better mental health system. It really needs to be addressed,” Bolin said standing on his front porch.

Bolin said that the Twin Aire neighborhood has been a high crime area for too long. He said he recently had about $6000 worth of lumber stolen out of his backyard. As a father, he’s watched his sons struggle with mental health encounters that landed them in jail.

“I don’t have a problem with them putting a jail this far away. In fact, if we need one, we need one.”