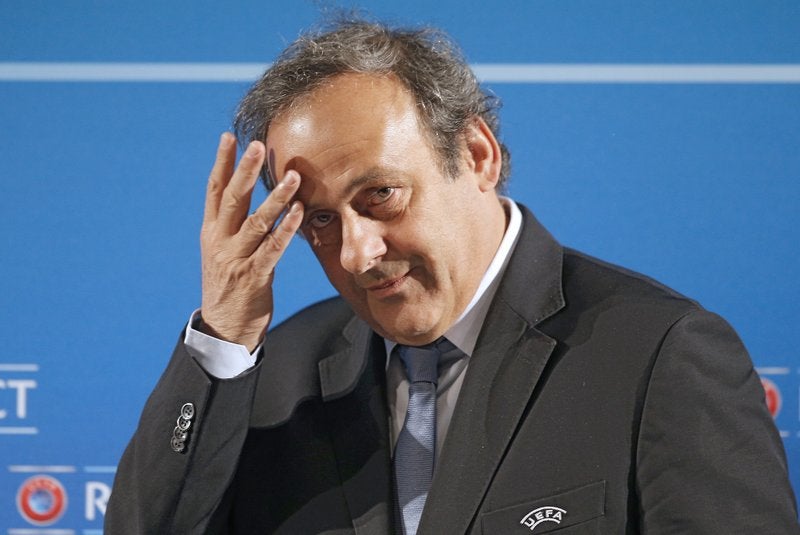 PARIS (AP) — Former UEFA president Michel Platini denied wrongdoing during police questioning Tuesday following his arrest as part of a corruption probe into the vote that gave the 2022 World Cup to Qatar.

Platini, a former France national team great who became one of soccer’s most powerful administrators before being banned from the game, was placed in custody when summoned to the Judicial Police’s anti-corruption and financial crimes office outside Paris, a judicial official told The Associated Press, confirming a report by online news publication Mediapart. The official spoke on condition of anonymity because the person was not authorized to discuss an ongoing investigation.

The 63-year-old Platini can either be released or formally charged after questioning ends.

Platini’s communications team said he was also quizzed on the awarding of the 2016 European Championship to France, adding that he was “absolutely confident in the future” and has “strictly nothing to reproach himself for.”

“Michel Platini expresses himself serenely and precisely, answering all the questions, including those on the conditions for the awarding of the 2016 Euro, and has provided useful explanations,” the statement said.

Platini’s communications team said the former France national team captain was placed in custody only for “technical reasons.” His lawyer, William Bourdon, explained that by holding him in custody, police investigators aimed to ensure that Platini and other witnesses couldn’t confer with each other about their testimonies.

Platini helped France reach the World Cup semifinals in both 1982 and 1986, and he led his national team to the 1984 European Championship title. He also played club soccer for Nancy and Saint-Etienne before a high-profile transfer to Italian club Juventus. He won three straight Ballon d’Or titles as the best player in Europe while playing for Juventus from 1983-85.

Also detained Tuesday was Sophie Dion, a former sports adviser of Nicolas Sarkozy when he was French president, the judicial official said. Claude Gueant, the former secretary general of the Elysee under Sarkozy, was heard as a witness and not detained.

French financial prosecutors have been investigating the bidding process for the 2018 and 2022 World Cups and previously questioned former FIFA president Sepp Blatter. France’s financial prosecutor services opened the investigation on grounds of private corruption, criminal association, influence peddling and benefiting from influence peddling relating to the 2018 and 2022 World Cups, which were awarded to Russia and Qatar, respectively.

FIFA said it is aware of Platini’s situation but declined to comment further on his case. Because of his position as president of UEFA, Platini was also a FIFA vice president.

Much intrigue has centered on Platini’s decision to vote for Qatar.

Blatter, who was FIFA president at the time of the vote in 2010, blamed Platini for backing out of a secret “gentleman’s agreement” to award the 2022 tournament to the United States.

Platini told the AP in 2015 that he “might have told” American officials that he would vote for the United States bid. However, he changed his mind after a November 2010 meeting, hosted by then-president Sarkozy at his official residence in Paris and Qatar’s crown prince, now emir, Tamim bin Hamad al-Thani.

Platini has long insisted that the meeting did not influence his vote for Qatar less than two weeks later.

“Sarkozy never asked me to vote for Qatar, but I knew what would be good,” he told the AP in 2015.

But Blatter claimed in a 2015 interview with the Financial Times that Platini told him ahead of the World Cup vote: “I am no longer in your picture because I have been told by the head of state that we should consider the situation of France.”

Both Platini and Blatter were toppled from their positions of power at the top of soccer in 2015. Platini was banned by FIFA for financial misconduct in relation to a $2 million payment authorized by Blatter — a suspension due to expire in October.

Qatar’s methods to bring the World Cup to the Middle East for the first time have been subject to investigations by FIFA. American attorney Michael Garcia found that some of Qatar’s conduct “may not have met the standards” required by FIFA but concluded there was no “evidence of any improper activity by the bid team.”