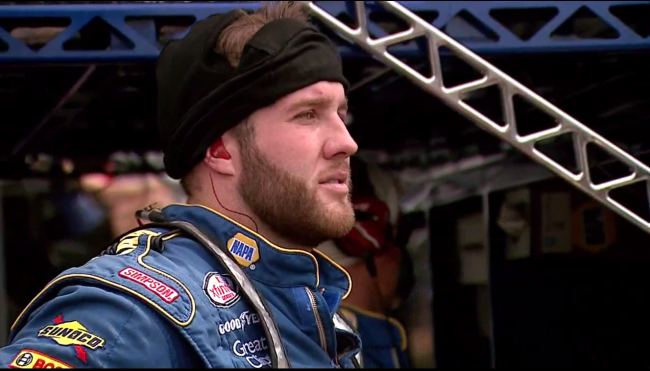 INDIANAPOLIS (WISH) — Before Landon Walker was the fueler on Kasey Kahne and Chase Elliott’s pit crew, he was Dwayne Allen’s teammate at Clemson.

“He doesn’t know any less about race cars than I do,” joked Walker. “All I know is how to put gas in them and work around the pit stop.”

After being cut by the Cincinnati Bengals shortly after being signed due to a knee injury, Walker, a former offensive lineman, wasn’t sure what to do. The lifelong NASCAR fan then made a couple of phone calls and found himself in Charlotte with Hendrick Motorsports.

“Honestly it’s not so much athleticism as it is the ability to work under pressure and have confidence in yourself,” said Walker of the parallels between football and working in the pits. “Athleticism is great if you have it, but if you don’t, you can work hard and be good at what you do.”

Landon is part of a growing trend of former NFL and college football players who are finding a permanent home in NASCAR. Hendrick Motorsports is at the heart of it. Chris Burkey, a former scout with the Miami Dolphins, helped them start a developmental program in 2009, hoping to turn top notch athletes into the best on pit road.

“I’ll go into a college and talk to the guys I know, and I’ll talk to the strength staff and say, ‘I don’t want the guys that are going to be pros, I want the guys who are good athletes. That want to compete and do something a little different,’” said Burkey.

“You go from the NFL where you play 80 snaps a game, you go here you get 6 times, and every time you have to be perfect,” said Walker

“We live in the tens of thousands of seconds,” said Burkey. “We have to be like the defense. We can’t come on pit road and lose positions.”

The investment has paid off. Hendrick has won three championships since the program began.