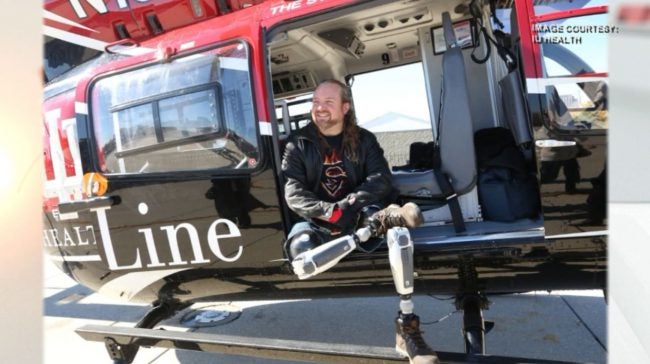 SPEEDWAY, Ind. (WISH) – On the Red Carpet for the Rev event at the Indianapolis Motor Speedway, the stars stand out. But Jeremy Warriner stands tall.

“It’s just wonderful to be able to be here, represent patients who’ve gone through the same kind of experience,” he said.

Odds are most people haven’t shared Warriner’s experience. 10 years ago he was in a car wreck that nearly killed him.

“Lifeline flew me from Putnam County to (IU Health) Methodist Hospital where really my life was saved multiple times in the process of getting there and from that point forward,” he said.

Due to his injuries, Warriner lost his legs but not his desire to live a productive life.

He now uses a type of prosthetic leg most people haven’t seen before called the Power Knee. He said he was one of the first 20 people in the world to use the leg technology.

“They are I don’t want to say bionic but they’re robotic,” Warriner said of the Power Knee. “They actually sense the way that I’m moving my upper body and they take over and get me where I need to go.”

Recently, that meant a trip back in the LifeLine helicopter with the crew that initially saved him. Only this time he was conscious and had his wife by his side.

“I got to go for a flight around the city, replacing that missing gap in my mind with a really positive amazing experience as opposed to what it would have been had I actually remembered that,” he said.

The flight was a new memory. But he always remembered the care he received from doctors, surgeons, and nurses at IU Methodist Hospital who got him back on his new two feet.

“Those folks were the first people that helped me take those steps back towards a life that initially when I first woke up, I didn’t think there was a life after this,” he said.

The Rev event raises money for IU Health statewide trauma programs including services for drivers and patrons at the IU Health Emergency Medical Center at the Indianapolis Motor Speedway.