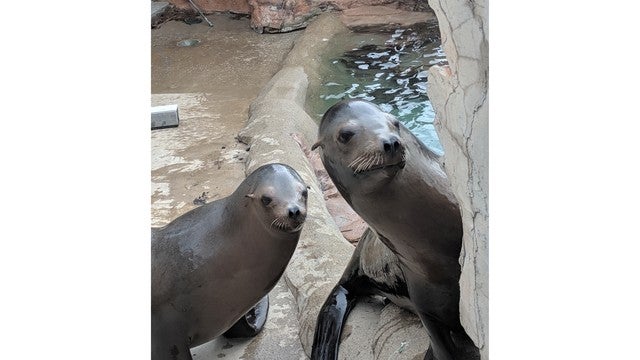 FORT WAYNE, Ind. (WANE) – The Fort Wayne Children’s Zoo is mourning the deaths of two sea lions that died within three weeks of one another.

The zoo said Thursday that California sea lion Fishbone died Wednesday afternoon during a medical procedure at the Fort Wayne Children’s Zoo. The death came after Fishbone’s sister Grits was euthanized March 30 after her health deteriorated while under veterinary care.

The staff veterinarian at the zoo said officials are unsure what caused the sea lions’ deaths. They checked the water to see if something may have contaminated it, but nothing showed in the tests. The zoo also consulted with staff at the Shedd Aquarium in Chicago.

“I have moments where I just cry, but it’s OK. I just have to count my blessings and know that we did our absolute best, everything we could have possibly done to save these girls,” said sea lion trainer Rachel Purcell.

Fishbone and Grits were born June 14, 2001, at Sea World Orlando. They came to the Fort Wayne Children’s Zoo in October 2002 and have swam in the sea lion exhibit for the past 16 seasons.

“There’s not really any words to put the sadness that everybody is feeling here at the zoo. There’s a lot of mourning and loss. These were great ambassador animals that touched a lot of people, not only here at the zoo, but in the Fort Wayne community and guests who came to the zoo. And you can see that just on comments, reaching out on Facebook with support,” Rachel said.

“We share this heartbreak with our animal care professionals who cared for these sea lions every day, for the past 17 years,” said Jim Anderson, the zoo’s executive director. “We thank them for their outstanding work.”

Rachel said she and the other trainers are working on adjusting sea lion shows with Cass and Legend, the zoo’s two remaining sea lions. The staff is also making sure Cass and Legend are doing alright after the loss.

“I can only make the assumption that I’m sure they notice that they’re not there, but their trainers let us know that they are behaving absolutely normally,” said Dr. Kami Fox, staff veterinarian at the zoo.

As for making the sea lion exhibit a little less lonely for Cass and Legend, the zoo says it’s still too early to make that decision.

Opening day for the Fort Wayne Children’s Zoo will be April 27.