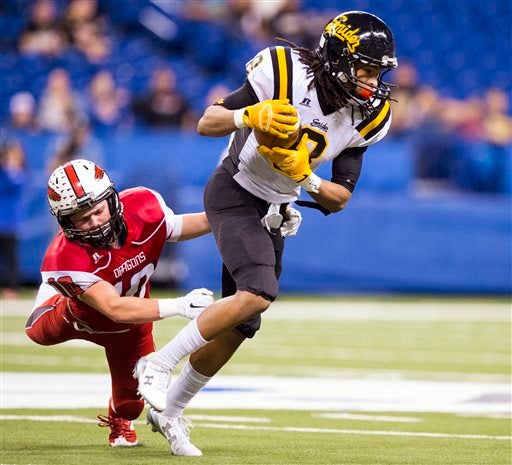 INDIANAPOLIS (AP) – The Class 5A football title matchup on Friday night was as billed and more – two of the state’s most prolific offenses shattering records and turning what was an early blowout into one of the most memorable finishes in Indiana finals history.

“Holy cow, I don’t know how many back-and-forth there was, but that tests your character and your love for one another,” Snider coach Kurt Tippmann said. “They stuck together and came out victorious.”

A total of 14 state finals records were set or tied in the wild contest. New Palestine’s Alex Neligh’s 501 passing yards topped a record previously held by Jeff George. The Dragons broke their own record of total offensive yards set last year with 757. And the teams combined for the most points in a title game (125) and most combined yards (1,302).

New Palestine, which won the Class 4A championship a year ago and made the jump to 5A this season, erased a 28-point deficit after falling behind 42-14 before halftime. From the end of the second quarter through the fourth quarter, the Dragons (13-1) scored 35 unanswered points to take a 49-42 lead with 8:34 left.

During that stretch, Neligh gouged Snider’s defense by connecting with wide receiver Duke Blackwell time after time. By the end, Blackwell’s 328 receiving yards had shattered the old state record of 192.

“We stopped shooting ourselves in the foot,” Neligh said. “We came out in the second half firing on all cylinders.”

But the final 8½ minutes etched this game into the history books.

Following New Palestine’s go-ahead score, Snider tied it at 49-49 when Malik Bramley returned the kickoff for a touchdown. The Dragons punted on their next possession only to see Snider go in front 56-49 with 5:09 left on a 57-yard touchdown pass from Stiebling to Bramley.

Neligh pulled New Palestine within 56-55 but Dominique Slaughter blocked the extra point attempt. The Dragons forced Snider to punt and scored a go-ahead touchdown to go up 61-56 with 1:03 left in the game.

That set the stage for a 7-play, 68-yard drive engineered by Stiebling that gave Snider its second state football title and a celebration fit for champions.

“It was a roller coaster and we did a great job surviving the lows,” Stiebling said. “We just came out and played with all we had and left everything on the field tonight.”

“We did not come out and execute well early and that is my fault,” New Palestine coach Kyle Ralph said of the Dragons’ 28-point deficit. “We just were not ready to play and that is a reflection of me.”