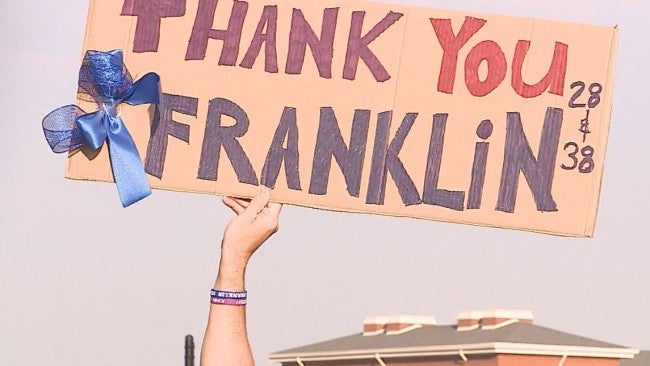 FRANKLIN, Ind. (WISH) – Saturday marks one year since a tragedy that took the lives of two teenagers and forever changed the Franklin community.

Jason Moran and Michael Chadbourne died after trying to save their friend, Sarah McLevish, who was caught in the dam at the Big Blue River. McLevish survived, but suffered a serious brain injury. Mark Nally and Trent Crabb went in after McLevish as well, but made it out of the water safely.

The weekend will be a somber one in Franklin and in Edinburgh where the accident happened, but it’s also a weekend the community says it needs to face in order to heal and move on.

“It was a difficult time, a difficult year for those kids as well as all the students of our school and our entire community. It’s one of those things that is a life lesson and it’s something that I’m sure these kids and even the adults in our community have learned from. Sometimes learning opportunities are not always the most pleasant. It’s been difficult for sure, but I’ve been really proud of our student body and our community the way that they’ve responded,” said Adam Reese, the Franklin High School football coach.

Over the past year, there has been a massive outpouring of support from the people of Franklin. They covered the town with blue ribbons, raised thousands of dollars for the families, and honored all five kids involved at several ceremonies.

The two surviving boys graduated from high school this spring. At that graduation, the school presented the families with the ribbons that were displayed in the high school honoring Jason, Michael and Sarah all year long. The football coach says it brought some closure to the Franklin students.

“I think these two young men are always going to be in our hearts and in our minds, as long as we live and that’s just part of the nature of a tragedy like this. You never really forget but you do start to understand that we have to move on,” said Reese.

The high school football coach says over the past year the high school has changed. He said it forced the surviving boys, and the rest of their classmates to grow up a faster than anyone should have to.

“I know that for myself growing up, I didn’t have to deal with the passing of good friends and teammates and classmates and things like that. How to grieve and how to handle their emotions at such a young age, when there’s no doubt high school students are kind of coming to grips with a lot of different emotions anyway. Just the normal nature of growing up. This certainly kind of sped the process up for them,” said Reese.

The mothers of the two surviving boys, Nally and Crabb, told 24-Hour News 8 the boys are beginning to heal. They say it’s been a year full of grief, guilt and sometimes anger, but now the young men are looking toward the future. Both Nally and Crabb will start at Ivy Tech in the fall. Crabb’s mother said Trent still misses his best friends every day, but after this painful year she finally feels like she has her son back.

Saturday, Time Out Bar and Grille will host a fundraiser for the scholarship started in Jason and Michael’s names. A motorcycle ride will start at the high school at noon, and the benefit at Time Out will start around 1-1:30. In the past, hundreds of people have shown up for the rides and fundraisers.