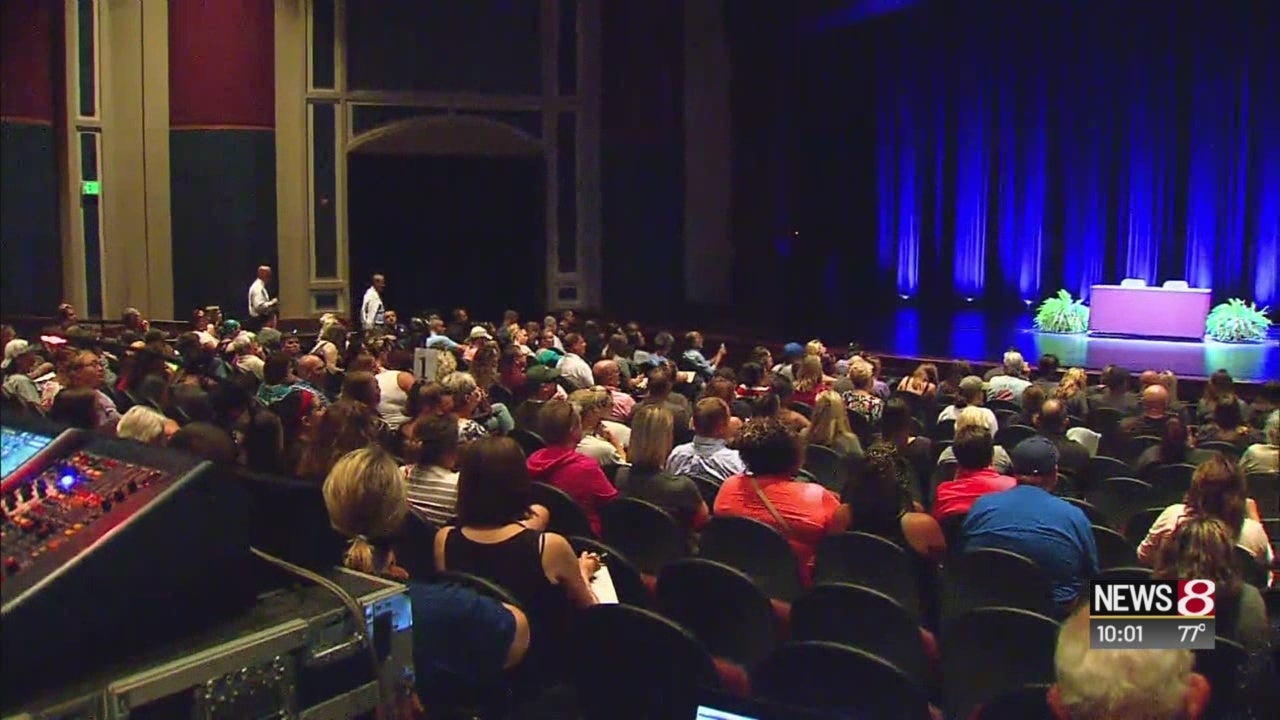 FRANKLIN, Ind. (WISH) — Several hundred in Franklin came to Franklin Community High School to get answers from state and federal leaders about the recent tests showing high levels of cancer-causing toxins in a couple homes.

The fear from some community members is that the problem is widespread and more homes could be in danger.

The heads from IDEM and the Indiana State Department of Health answered questions about the steps being taken right now to see if contaminants could be leaving two long-closed industrial sites in Franklin.

Some in the community fear it could be those now-closed industrial sites that the EPA has thought were safe since the 1990s.

IDEM said it’s clear those homes had contamination but what remains unclear is what caused it. “The results show in 12 of the 14 homes those sample results were below detection levels,” said Bruno Pigott, the commissioner for IDEM.

Edison Wetlands Association, which conducted the tests that showed the elevated toxins in June, disagreed with that assessment.

They said six homes registered toxins and two of them were beyond not only residential but commercial standards.

Pigott said one reason for the elevated levels could be that the results came from the kitchen, and it could have been cleaning products yielding the high toxins.

Darrell Cochran is one of the homeowners who said his kitchen registers the dangerous chemicals. He said he could understand it being his kitchen products but also that he believes there is something else going on.

IDEM offered to test any home that registered above-industry-standard chemicals.

Cochran said he wants that to happen.

“You can’t solve a problem if you don’t address it,” he said.

Hundreds more wonder if it could be their home, too.

For an hour and a half, dozens of people asked their questions of Pigott and Dr. Kristina Box, the commissioner of the Indiana State Department of Health.

“How can corrective action be determined to be protective of the human health in the environment when the potentially impacted areas have not been defined?” asked Shannon Lisa, the program director for Edison Wetlands Association, which is based out of New Jersey. Her question was answered by the U.S. EPA which is leading the investigation of the two closed industrial sites.

“What we’re trying to do right now with the company is to go back in and confirm the situation that existed in the late 90s still exists today,” said a representative from the EPA.

Until then, the EPA said it will not do residential testing.

Edison Wetlands Association sent a letter to the EPA asking that testing be done a couple miles around the industrial sites, because they question if contamination has happened since the 1990s.

Edison Wetlands Association said its contractors discovered a missing filter at one of the sites that was supposed to remove toxins from being released into the community.

Friday the EPA said it had added a carbon filter to that piping. Though asked, it remains unclear if the Edison Wetlands Association’s assertion is true.

The state agency heads said of the meeting, that while they anticipated many questions, lots would not have answers on Friday.

The agencies committed to working to figure out what is going on in Franklin.

Pigott said it was encouraging two Franklin Community Schools in the area showed chemical levels well below regulation in the soil, air and water.

Several Franklin residents asked if all schools would get tested before the school year starts next week.

Pigott said that would be the district’s decision, not the state’s.

Another question posed by the two Johnson County moms who run the group, If It Was Your Child, dealt with cancer clusters.

They said there have been about 50 cancer cases reported in Franklin since 2008, above the national average.

A cancer cluster, per a recent federal law, can be a high number of specific cancers concentrated in a specific area. A cancer cluster declaration would open Franklin up for additional funding and opportunities to tackle the issue.

Right now Franklin is not considered a cancer cluster because Box said the numbers don’t add up.

But Stacie Davidson and Kari Rhinehart, the founders of that organization, said the state is not following the new definition of a cancer cluster. The pair also said the state does not have the most recent data and is 18 months behind.

Rhinehart said they get calls frequently about new cases. In fact she said that evening she heard about three more.

Now the community will wait to see what the data shows from the EPA at the closed sites as their wait for answers continues.