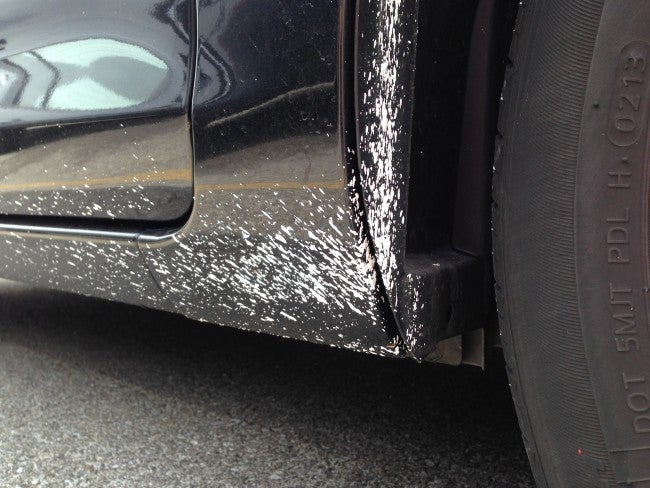 INDIANAPOLIS (WISH) – Potholes aren’t the only complaint drivers have with the city. There’s another problem that’s been splattering cars this season.

Lane stripes downtown were redone today and based on tire tracks near them, it appears some cars had a taste of it, and Roderick Darring, owner of Darrings Detail, expects some of those drivers will soon be his customers.

“They call and they’re just up in arms and they don’t know what to do,” said Darring.

The good thing for them is he knows what to do. Removing road paint is one of his specialties. He showed pictures of cars that at one point had paint up to a quarter of an inch thick on them.

“If it’s been on there for some time and it’s allowed to cure, the process (of removing it) can be quite lengthy, but we can get in most cases all of it off,” he said.

Darring said a combination of chemicals, plastic razor blades and a professional touch will do the trick.

While it is possible for the average person to remove road paint, Darring warns that people often make mistakes that could damage a car’s paint.

“They’ve either used something too abrasive or something that we would call ‘too hot’ as a chemical and actually damage rubber trim or the plastic textured lower rocker panels or even some of the side moldings on the car,” he said.

Cleaning up the cars come at a cost. He said the examples he showed us ran about $150 to $250, but he said every car is analyzed on a case-by-case basis.

Just like pothole damage, drivers can file a tort claim with the city. But the city will only foot the bill if it’s proven it was negligent.

Regardless of who pays, it’s the time the paint stays on the car Darring feels drivers should be more worried out.

“If it’s fresh it comes off quite easier than if it’s been on there for several days or weeks or months,” he said.

To file a tort claim, be sure to provide copies of receipts, pictures of the damage and a short summary of exactly what happened.

For more information on how to file a tort claim, click here.