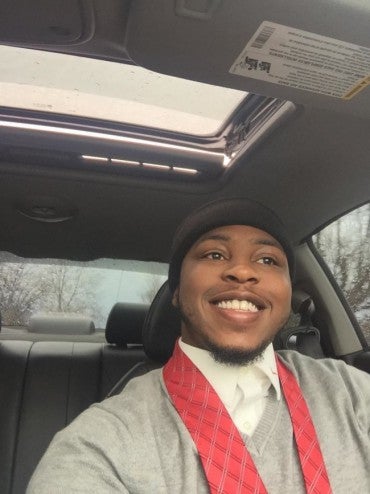 LAWRENCE (WISH) — Family and friends are remembering a man killed in a hit and run while riding his motorcycle in Lawrence on May 10.

Police said Jonathan Macklin, 25, was riding his motorcycle when he was hit by a car. The person behind the wheel kept driving. Macklin was wearing a helmet, but did not survive the impact.

His loved ones and friends are praying for justice and peace. Many of them returned to the crime scene for a vigil to remember a life that was cut short.

Friends told 24-Hour News 8 that Macklin moved to Lawrence last Sept for a job. Originally from Chicago, the 25-year-old graduated from Clark University in Atlanta, where he spent a lot of time volunteering.

“He was a fun person. Always positive, always upbeat and would always do something to keep you laughing,” said Tyrelle Collins, member of Omega Psi Phi fraternity.

The Omega Psi Phi fraternity organized the vigil where Macklin was interested in becoming a member of the local chapter, but didn’t get a chance.

“We voted just last night to make him an honorary member of our chapter,” said Collins. “So, that’s one of the things that we’ll keep his name alive through our chapter.”

They said the person behind the wheel hit Macklin and kept driving.

“Turn yourself in, come forward, running from this will not save you,” said Collins. “It will not go away, it will only eat at you more and more so just turn yourself in.”

The Omega Psi Phi fraternity is offering a $1,500 reward for any information leading to an arrest.

Macklin’s mother and sister told 24-Hour News 8 via Skype that they have no ill feelings toward the driver. They just want closure.

Click here for more information on a scholarship fund in honor of Macklin.