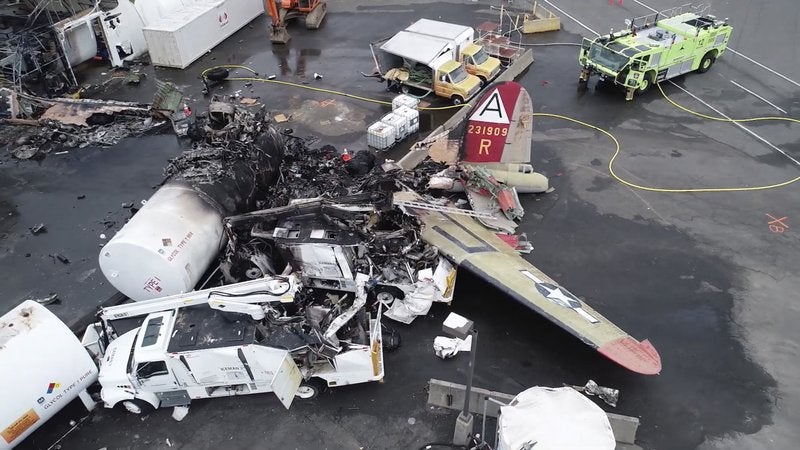 This image taken from video provided by National Transportation Safety Board shows damage from a World War II-era B-17 bomber plane that crashed Wednesday at Bradley International Airport, Thursday, Oct. 3, 2019 in Windsor Locks, Conn. The plane crashed and burned after experiencing mechanical trouble on takeoff Wednesday morning from Bradley International Airport. (NTSB via AP)
by:
Posted: Oct 15, 2019 / 11:39 AM EST / Updated: Oct 15, 2019 / 11:39 AM EST

HARTFORD, Conn. (AP) — The weather was calm and clear at the time of a deadly B-17 crash at a Connecticut airport, and tests on the airplane’s fuel did not turn up any sign of debris or contamination, federal investigators said Tuesday.

A preliminary report by the National Transportation Safety Board appeared to rule out some factors in the crash that killed seven people but did not shed light on the possible cause.

The World War II-era bomber crashed and burned after experiencing mechanical trouble on takeoff from Bradley International Airport the morning of Oct. 2. The plane was carrying 13 people, and five passengers and the two pilots were among those killed.

According to the report, one of the pilots asked to return shortly after takeoff because of a “rough mag” in one of the engines. The tower controller asked about the plane’s progress toward the runway, and the pilot said they were “getting there.” There was no further communication from the plane.

The airplane struck approach lights about 1,000 feet from the runway and contacted the ground 500 feet short of the runway. It then veered off the runway before colliding with vehicles and a tank of deicing fluid, according to the report.

The engine in which the pilot reported a problem and other parts of the wreckage were recovered for further examination, the NTSB said.

The retired, civilian-registered plane was associated with the Collings Foundation, an educational group that brought its Wings of Freedom vintage aircraft display to the airport. The vintage bomber was used to take history buffs and aircraft enthusiasts on short flights.

A third member of the flight crew and four passengers were seriously injured in the crash. Another passenger and one person on the ground suffered minor injuries.