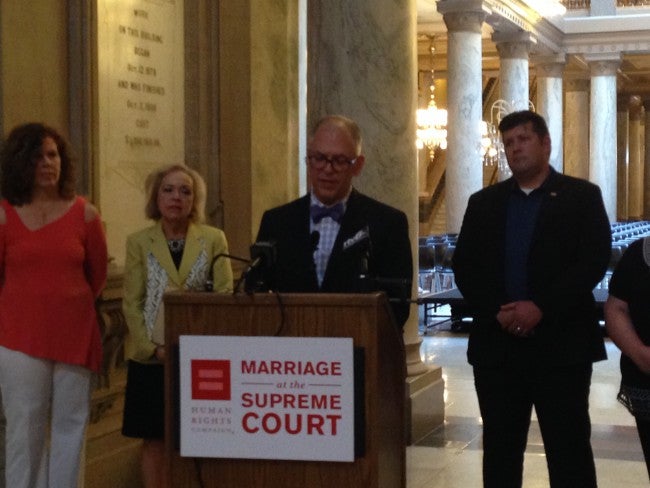 INDIANAPOLIS (WISH) – Jim Obergefell is a Cincinnati real estate agent who is a celebrity among gay rights advocates.

He came to Indianapolis even though gay marriage is legal here.

“To say, you know, marriage equality could be the law of the 50 states at the end of the month,” he said, “but there’s a lot more that we still have to do and our fight is not over.”

If it’s the law of the land it will be because Obergefell wins a case that was argued before the U.S. Supreme Court in April.

It was filed when the state of Ohio refused to recognize his marriage to his husband John, when John died of ALS.

They were married in Maryland.

“It will mean John and I matter,” he said on the day of the argument. “It will mean we have the same rights and responsibilities as other Americans.”

And that brought him here to take part in a Statehouse news conference in support of statewide equal rights protections.

“I fight for an end to discrimination, nothing more and nothing less,” he said during the news conference. “And here in Indianapolis I fight for an America that lives up to its promise of liberty and justice for all.”

“I truly believe that history is going to show that this is the biggest civil rights issue of this century,” said civil rights attorney Karen Celestino-Horseman.

When asked about the possible outcome if the Supreme Court rules against Obergefell, he said he doesn’t think about it.

“It’s too painful to even consider what it would feel like,” he said, “to be told by the highest court in the land that I truly am a second class citizen.”

Obergefell’s case was combined with cases from Michigan and Tennessee, but he is the only named plaintiff.

The Supreme Court should have a ruling by the final week of June.