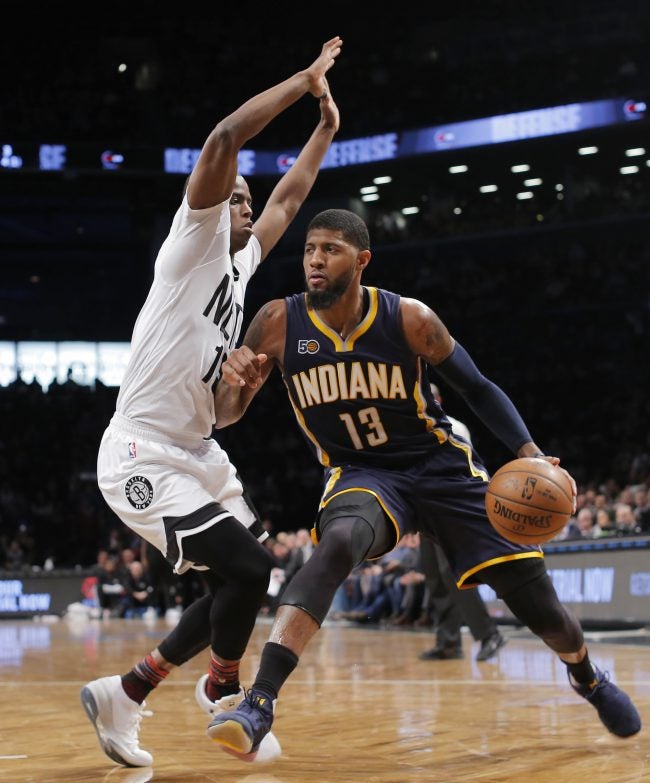 NEW YORK (AP) – Paul George and Jeff Teague carried Indiana down the stretch for a road win in Brooklyn.

Teague gave the Pacers a 100-95 lead on a layup with 1:21 left and then iced the game 50 seconds later with a steal and two free throws that made it an eight-point game.

“It’s on us,” George said referring to Teague and him closing the game down the stretch for Indiana. “It’s on me for sure. Jeff is just as scrappy, just as good defensively at sniffing plays out and getting his hands on the ball making good plays defensively. It’s wintertime and what Indiana’s used to. That’s what it comes down to, we need leaders to step up in moments like that.”

Myles Turner and Al Jefferson each added 11 points for the Pacers, who have won five straight games.

Brook Lopez scored 23 points, Sean Kilpatrick had 18 and Joe Harris added 15 for the Nets, who have dropped eight straight and 11 in a row at home.

Brooklyn trailed for the entire game before taking its first lead 85-83 with 8:37 left on a 3-pointer from Quincy Acy.

“It’s frustrating,” coach Kenny Atkinson said. “Those guys are frustrated. But I know tomorrow the sun will come up and they’ll work their tails off. That happens every day.”

Indiana led by 10 at the half and by six after three quarters.

George led Indiana 15 with points while Lopez led Brooklyn with 12 points at the half.

Pacers: Coach Nate McMillan praised Glenn Robinson III as a key role player. “He’s coming out and he’s playing hard and that’s certainly a start. Defensively, I think he’s improved on that area. Offensively, he’s knocking down some shots. Defensively is the reason he’s been put out on the floor. We need him to defend his position, rebound the ball and when there are opportunities to receive the ball from kick outs, knock down those shots. He’s been able to do that for us.” … Thaddeus Young sprained his left wrist during the game. … Rodney Stuckey (right ankle sprain) and Rakeem Christmas (sore right groin) were out.

Nets: Atkinson has been impressed with Caris LeVert’s development in his rookie season. “His progress has been faster than I thought. With all the time off he hand in college and as quickly as he’s come along, I’m surprised how far along defensively he is. The biggest surprise has been his ball handling and his ability to break his defender down, make passes and play pick-and-roll.” … LeVert started his first game. … Lopez has now appeared in 532 games for the Nets, which moves him into a tie with Jason Collins for third on the franchise’s all-time games played list. . Jeremy Lin (strained left hamstring) was out.