German synagogue is attacked on holy day; 2 dead nearby 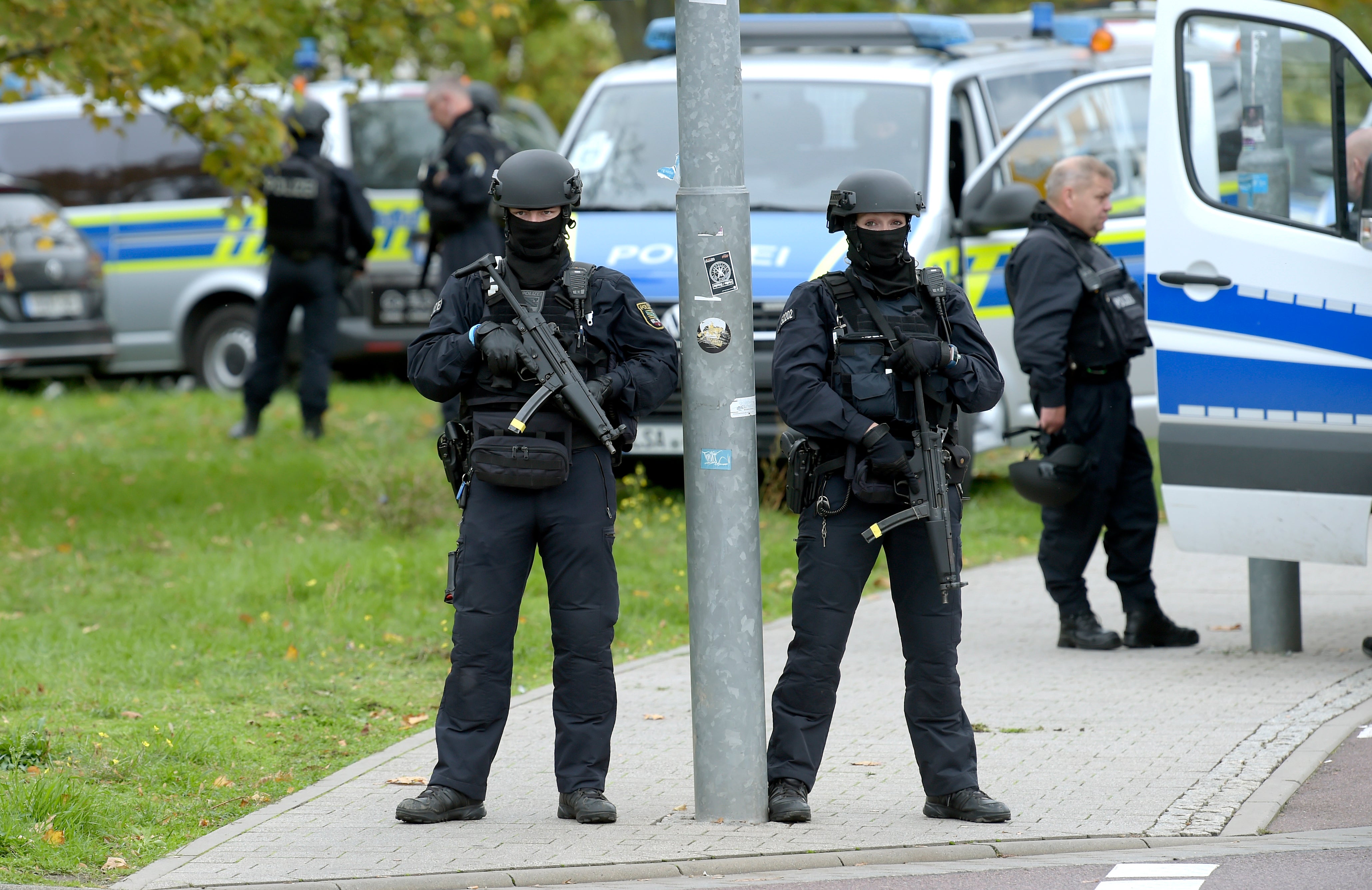 HALLE, Germany (AP) — A heavily armed assailant shouting anti-Semitic sentiments tried to force his way into a synagogue in eastern Germany on Yom Kippur, Judaism’s holiest day, then killed two people as he fired shots outside the building in an attack Wednesday that was livestreamed on a popular gaming site.

The attacker shot at the door of the synagogue in the city of Halle but did not get in as 70 to 80 people inside were observing the holy day, a local Jewish leader said.

“The root of all problems are the Jews!” the attacker shouted in English before the shooting, according to the head of the SITE Intelligence Group, who wrote on Twitter that 35 minutes of footage of the attacks were posted online. Rita Katz said it showed the attacker shooting a woman in the street after failing to enter the synagogue, then entering a business and killing another person before fleeing.

Germany’s top security official, Interior Minister Horst Seehofer, said authorities must assume that it was an anti-Semitic attack, and said prosecutors believe there may be a right-wing extremist motive to it. He said several people were injured.

The filming of Wednesday’s attack echoed another horrific shooting halfway around the world when a far-right white supremacist in March killed 51 people at two mosques in Christchurch, New Zealand and livestreamed much of the attack on Facebook. That massacre drew strong criticism of social media giants for not immediately finding and blocking such a violent video.

Video of the attack was livestreamed on Twitch, which said it had “worked with urgency” to remove it. Twitch said it would permanently suspend any account found to be posting or reposting “content of this abhorrent act.”

The attack was the third to target a synagogue in a year, following attacks in the United States on synagogues in Pittsburgh and Poway, California.

Police said in a tweet early Wednesday afternoon that “the suspected perpetrators” had fled in a car after the attacks and quickly reported that one person had been arrested. Officers spread out in force across Halle, a city of 240,000, urging residents to stay at home.

Several hours later, police said there was no longer an “acute” danger to the city and residents could go back into the streets. They gave no details about the person who had been arrested or specify why their assessment had changed, but the news agency dpa and the Bild newspaper cited unidentified security sources as saying the evidence points to a lone assailant.

News magazine Der Spiegel, which didn’t cite its sources, said the suspect is a 27-year-old man from Saxony-Anhalt state, where Halle is located.

Federal prosecutors, who in Germany handle cases involving suspected terrorism or national security, took over the investigation into the attack in Halle.

A video clip broadcast by regional public broadcaster MDR showed a man in a helmet and an olive-colored top getting out of a car and firing four shots from behind the vehicle from a long-barreled gun. It wasn’t clear what he was shooting at.

Pictures from the scene showed a body lying in the street behind a police cordon, opposite the synagogue, which was about 30 meters (yards), dpa reported.

The head of Halle’s Jewish community, Max Privorozki, told Der Spiegel that a surveillance camera at the entrance of the synagogue showed a person trying to break into the building while there were 70 or 80 people inside.

“The assailant shot several times at the door and also threw several Molotov cocktails, firecrackers or grenades to force his way in,” he said. “But the door remained closed — God protected us. The whole thing lasted perhaps five to 10 minutes.”

Dpa quoted unidentified security sources as saying that an assailant laid home-made explosives outside the synagogue.

A witness interviewed on n-tv television said he had been in a kebab shop when a man with a helmet and a military jacket threw something that looked like a grenade, which bounced off the doorframe. Conrad Roessler said the man then shot into the shop at least once.

“All the customers next to me ran, of course I did too. I think there were five or six of us in there,” Roessler said. “The man behind me probably died.”

“I hid in the toilet,” he said. “The others looked for the back entrance. I didn’t know if there was one. I locked myself quietly in this toilet, and wrote to my family that I love them, and waited for something to happen.”

Police then came into the shop, he said.

Synagogues are often protected by police in Germany. Security was stepped up at synagogues in other cities after the shooting in Halle.

“Shots being fired at a synagogue on Yom Kippur, the festival of reconciliation, hits us in the heart,” German Foreign Minister Heiko Maas said on Twitter. “We must all act against anti-Semitism in our country.”

Vice Chancellor Olaf Scholz said that “all our country’s citizens of Jewish faith can be sure that we are with them with our whole heart and we will give them all the security that is possible.”

The U.S. Embassy in Berlin said “today’s attack is an attack on all of us, and the perpetrators must be held accountable.”

Police said shots were also fired Wednesday in Landsberg, about 15 kilometers (nearly 10 miles) from Halle but it wasn’t clear whether the two situations were related.

The European Parliament held a moment of silence at the start of its session Wednesday to mark the unfolding situation in Halle.

Manfred Weber, the German leader of the center-right EPP group in the parliament, declared that “anti-Semites and anybody who wants to question freedom of belief are not just our opponents, they are our enemies.”

An earlier version of this story was updated to correct the spelling of the Jewish community leader’s surname to Privorozki, not Privorotzki.