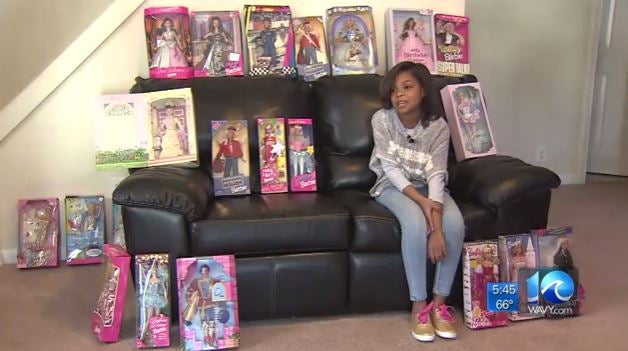 NORFOLK, Va. (WAVY) – Every doll deserves a doll. That’s the motto for a Norfolk 9-year-old on a mission. While most little girls are playing with Barbies, Gianni Graham has been thinking of ways to give them away.

She set a goal at Christmas to collect 1,000 Barbies for girls at homeless shelters and foster homes. On Tuesday, she reached that goal.

In her home there are hundreds of them piled high. They’ve been sent from all over with encouraging notes attached telling Gianni Graham to “Keep up the great work” because “The world needs more people like her.”

“Everything just happened literally overnight,” said Whitney Graham, Gianni’s mother. “It’s been amazing. Within a week we went from five Barbie’s to a little over 500 from people all over the U.S. and even outside.”

It all started with a Christmas wish. Gianni wondered if she could put smiles on the faces of girls less fortunate than herself. Her two dolls she received as gifts were the first official donations. Then it was time to see if other people would help her in her quest.

“I was building my Barbie doll house and I thought of it,” said Gianni. “I feel like girls in shelters should have the same as girls that are not in shelters. People donated more once they heard about it on Facebook. Every doll deserves a doll.”

“Just to know that I have a daughter that’s so selfless and so caring about others, it makes me a very proud mother,” said Graham.

Some people have sent one or two Barbies. Others have sent more. And Gianni has big plans for this movement that’s taken off. She’s going to begin distributing dolls during Spring Break.

You can also drop off Barbies or packing, shipping and wrapping supplies to “We Print It” at 5720 Hoggard Road in Norfolk or Fifty Eighteen/Daddy’s Kitchen at 5018 Princess Anne Road in Norfolk.