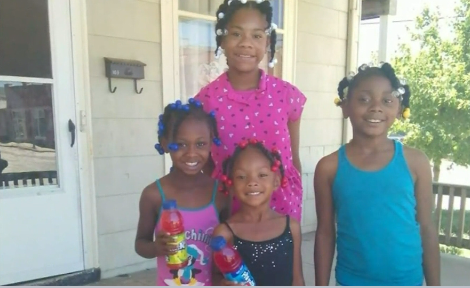 DELPHI, Ind. (WISH) — A community came together for a dedication ceremony to honor the lives of four sisters killed in a house fire in Flora.

It’s been more than five months now and still no arrest in the case. Investigators believe someone intentionally set the house on fire.

The vacant home is now a reminder of what happened in the small town. Reward money is has been offered for anyone with information that could lead to an arrest in this case.

Classmates unveiled a special place just down the street from the home to honor the girls.

It was an emotional evening in the courtyard at Carroll Elementary as Girl Scout Troop 198 paid tribute to their classmates.

“Everybody that donated just one little cap, thank you so much. It means so much to us,” said Jen Brobst, Girl Scout Troop 198 co-leader.

The troop spent months collecting caps and lids and recycled the materials to make four benches for 5-year-old Kionnie Welch, 7-year-old Kerriele McDonald, 9-year-old Keyara Phillips and 11-year-old Keyana Davis. They were known to friends and family as the K sisters.

They also dedicated two benches to Abby Williams and Libby German, who were murdered in Delphi. The project may have started as a way to renovate the courtyard for the school but has turned into much more.

Gaylin Rose is the mother of the girls killed in the flora fire. She attended the dedication.

“I was really excited. I was happy; it’s sad though,” she said.

Rose spoke to 24-Hour News 8 for the first time since the house fire.

“I’m angry they took four lives from me,” she said. “I’m gonna always fight for my babies because they know I loved them and they loved me.”

Meanwhile, Branden Apitz is also working on something special to honor the girls. He’s an art teacher at Carroll High School.

“I thought it was, like, a, more than just something that’s going to be a monument to their deaths,” he said.

Apitz — with help from around 100 students, teachers, and people in the community — carved the names of the K sisters, Abby Williams and Libby German onto this bench.

“I don’t know how you process that, so this was kinda like a way for me to help kids process what happened,” he said.

The bench will sit near Center and Columbia. Apitz said it will be place to remember and reflect.

Apitz said he’s hoping to have that bench delivered sometime next week.