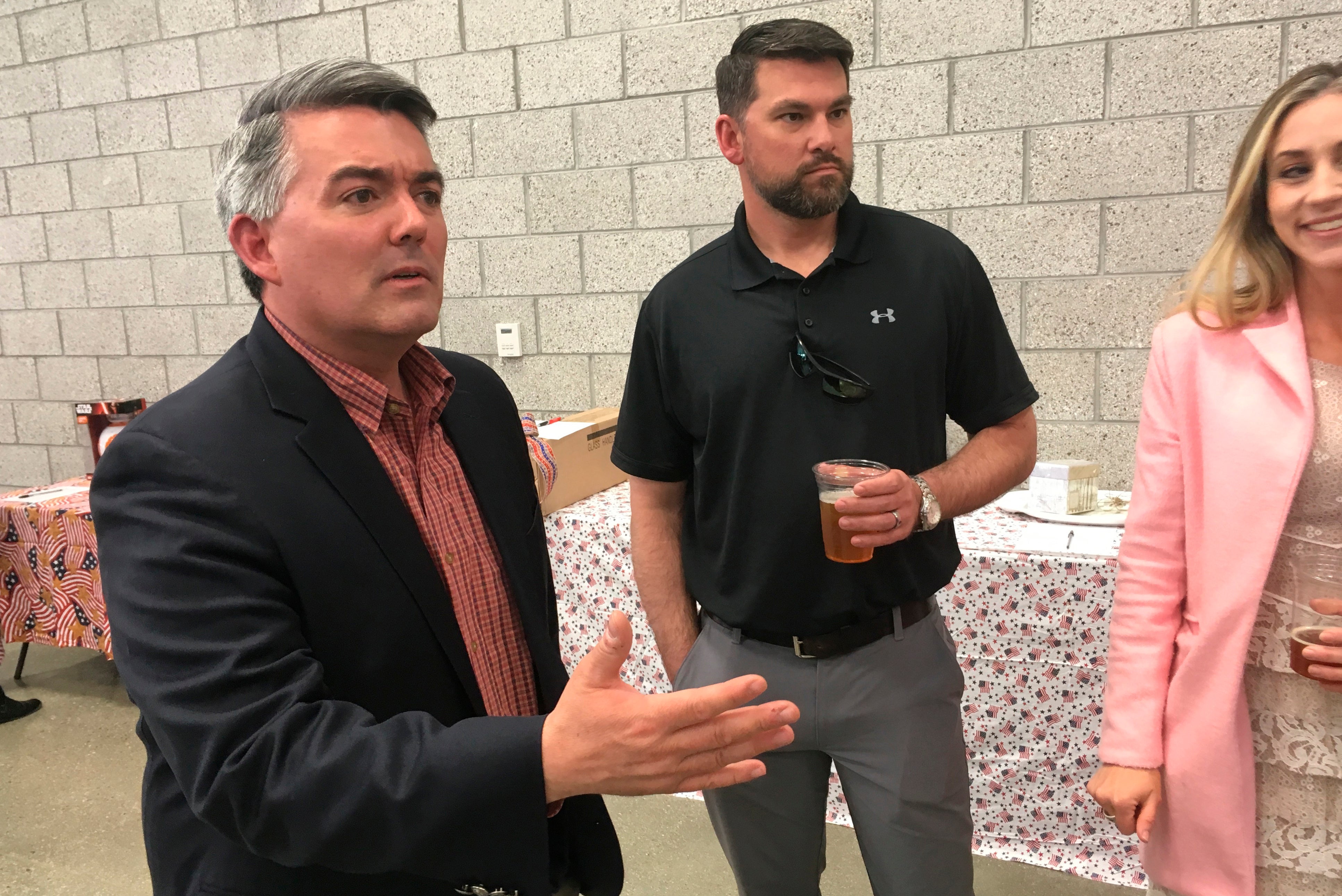 ALAMOSA, Colo. (AP) — In this scruffy, high-desert town encircled by prairies and potato farms, Sen. Cory Gardner drew shouts of approval last week for his message that Democrats are shoving the country toward socialism.

“That’s not what government is or what it should be,” he told about 200 Alamosa County Republicans at a barbecue fundraiser in a National Guard armory. “We have to stand up and fight. Are you going to join me in this fight?”

For Gardner and other Republicans making the same pitch , including President Donald Trump and Senate Majority Leader Mitch McConnell, the key question is whether it will attract moderate voters, not just their conservative stalwarts. Based on interviews with over three dozen Coloradans last week from Denver’s suburbs south to this town in the flat San Luis Valley, the argument has yet to take root, though the GOP has 18 months to sell it before Election Day 2020.

Few volunteered a drift toward socialism as a major worry, with health care and living costs cited far more frequently. Several said capitalism was too embedded in the U.S. to be truly threatened and Republicans were using socialism to stir unease with Democrats by raising the specter of the old, repressive Soviet Union and today’s chaotic Venezuela.

“They’re preying on fear,” said David Kraemer, 67, a financial adviser who’s not registered with a political party and lives in the Denver suburb of Westminster.

Yet when asked directly whether socialism was a concern, many expressed a wariness of injecting more government into people’s lives. Rather than naming policies that troubled them, many mentioned two self-proclaimed democratic socialists: Vermont independent Sen. Bernie Sanders, who’s seeking the Democratic presidential nomination , and freshman Rep. Alexandria Ocasio-Cortez, D-N.Y. The comments suggested that Republicans might be tapping into unease over letting either party go too far.

“Checks and balances are what make this country so great,” said Steve Lajoie, 46, a self-employed carpenter from Denver and independent voter.

Gardner, 44, who’s expected to face a tough re-election fight next year, has been repeating his argument for months. He cites liberal Democrats’ “Medicare for All” bills for government-provided health care, and a Green New Deal proposal for aggressively cutting carbon emissions.

Sanders has sponsored Medicare for All legislation that’s been embraced by many of his Democratic presidential rivals. Ocasio-Cortez is an architect of the Green New Deal, which remains a concept, not proposed legislation. Many Democrats, especially moderates, have kept their distance from both plans, divisions Republicans are happy to exploit.

Democrats reject the socialism assertion as a distraction from Trump’s unpopularity and the issues they will emphasize, especially improving health care and protecting jobs and income. They say efforts to make health care more available and combat global warming have nothing to do with limiting individuals’ rights.

Democrats note that voters gave them total control of Colorado government in November despite GOP attempts to pin the socialism label on former U.S. Rep. Jared Polis, who was elected governor. They say growing numbers of younger, urban and Hispanic residents are steadily making the state more liberal.

“I think that probably does fire up their base, but you cannot win an election in Colorado with the Republican base alone,” Carroll said.

Republicans see a powerful argument in telling voters they need a GOP-controlled Senate for protection against Democrats who are coming after their current health insurance, their energy sector jobs and more.

“I think we’re running to be the firewall that saves the country from socialism,” McConnell, R-Ky., told reporters recently.

Republicans say the anti-socialism message will prove powerful in a state that overwhelmingly rejected a ballot initiative creating single-payer health care and where registered unaffiliated voters, often with libertarian leanings, outnumber both Democrats and Republicans.

The GOP hopes the appeal will win over suburbanites whose distaste for Trump helped Democrats capture the House in the fall. They note that public opinion polls find socialism is especially unpopular among older voters, Republicans and moderates.

Avery Jones, of Westminster, is one potential target.

“Taxes kill,” said Jones, 27. While she’s eager to improve her family’s health coverage, she sees “some merit” to checking Democrats from pushing toward universal health care because “it would just drive up taxes.”

But for every Jones, there’s a Rhett Lucero. Lucero, 40, eating lunch at the Riverwalk park that winds through the city of Pueblo, says Democrats’ efforts to expand health coverage and curb global warming make sense.

“It’s helping each other out,” said the auto body mechanic, who, like Jones, is an unaffiliated voter. “It’s putting our taxes to a real good use.”

Not all Democrats are dismissive of the socialism strategy.

Eva Henry, a commissioner of Adams County outside Denver, says her community’s blue-collar families might buy the GOP argument if they believe Democrats’ proposals would drive up taxes. “Our Democrats can vote Republican because they vote their pocketbooks,” the Democrat said.

Pueblo Mayor Nicholas Gradisar said he doubts the argument will sway many Democrats but warned, “Democrats have to be wary of it and they have to respond” by telling voters the party “will give you a fair shake.” Pueblo County, south of the economically surging corridor that runs from Boulder to Colorado Springs, leans Democratic but backed Trump in 2016.

Republicans say this time will be different. But one Coloradan’s comments suggest that past GOP warnings about Democrats may haunt Republicans.

“Every time a Democrat gets elected, they say, ‘We’re going to lose our guns,'” said Marc O’Leary, 48, of Westminster. “It never happens.”

All Indiana Politics / 49 mins ago