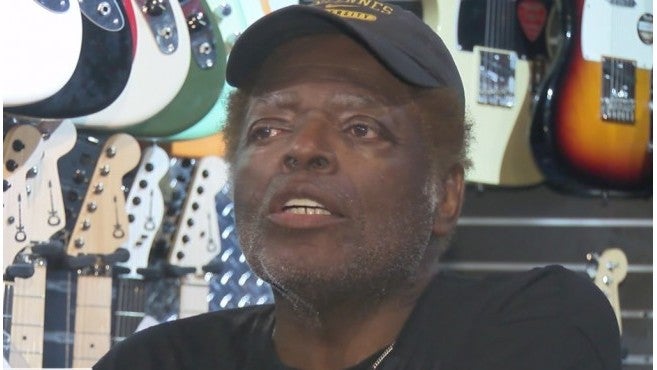 INDIANAPOLIS (WISH) – A popular local blues man says someone stole his guitar, which has his name painted on it.

Governor Davis of the Governor Davis Band said he packed up his guitar Thursday for a Mississippi Blues Fest. He forgot to lock the car near East Stop 11 Road and McFarland Lane, just west of Emerson Avenue on the south side. Davis went to bed, woke up Friday and the guitar was gone.

“It was the first guitar that I found out I could really play. And it has a unique, distinctive sound,” Davis said. “Losing it hurts because I have never found a guitar that comes close to what that was.”

Davis is a staple at downtown Indy’s Slippery Noodle Inn blues bar. He’s rocked venues across the state and once shared a stage with blues legend Elvin Bishop.

Davis borrowed a guitar to play in Mississippi last weekend and he used his backup guitar at a gig this week, but his mojo isn’t quite working.

“Everybody who works has some kind of tools they use for their job,” Davis said. “Not only do I play the blues but I play rock and I play a little country. One guitar is set up for one way and the other one is set up for blues.”

The blues man said the thief could scrub his name off the guitar, but it would damage the body. He was asking guitar shops to be on the lookout for the orange guitar.

“You can’t control what fate gives you,” Davis said. “I would hope somebody out there enjoys it if they’ve got it.”

Davis is still booking gigs. He’s playing May 4 at the Elm Street Brewing Co. in Muncie He hopes by then that he will have his favorite guitar back.