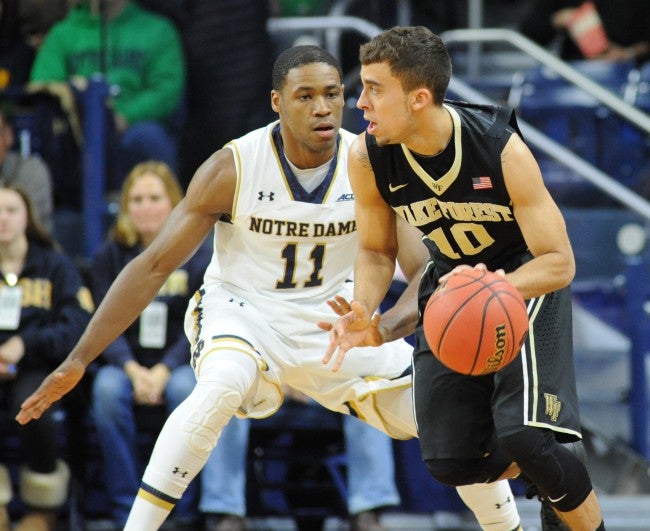 Devin Thomas, who averaged 20 points and eight rebounds in two Wake Forest wins over the Irish last year, had 26 points and 11 boards for the Demon Deacons (12-15, 4-10 ACC).

Notre Dame, second in the nation in field goal shooting coming in, hit just one of its first 12 attempts after not playing a game in six days. The Irish took a 43-41 lead into halftime after Grant’s drive and layup with three seconds left.

That bucket turned out to be the beginning of a 10-0 Irish run. Grant and Steve Vasturia hit consecutive 3-pointers to help the Irish open up a double-digit lead for the first time, less than two minutes into the second half. Vasturia finished with 12 points.

After Thomas scored on consecutive trips down the floor for Wake Forest, the floodgates opened for the Irish. Connaughton’s 3-pointer with 13:04 left was Notre Dame’s seventh consecutive make from deep, and Vasturia’s 3 with 11:43 to go gave the Irish a 19-point lead.

A 7-0 Wake Forest run got the Irish lead under 10 with 4:58 to go, but Connaughton responded with a 3-pointer from the wing on an assist from Grant, his 10th of the game.

The Deacons, who lost by two points to No. 2 Virginia on Saturday, took their largest lead, 36-32, with 3:28 left in the first half with Thomas’ three-point play on a thunderous two-handed dunk. Thomas had 15 points and eight boards by halftime.

Notre Dame: Grant joined Chris Thomas as the only players in Irish program history to record at least 1,500 points and 600 assists. … This marked the first of three games in seven days for the Irish after a week off.

Wake Forest: The Deacons made their first ever trip to South Bend and lost their first game to the Irish after winning the three previous contests between the programs. … Head coach Danny Manning’s last trip to Notre Dame came during the 1988 when he played for Kansas. The Jayhawks lost to the Irish, but went on to win the national championship that year.