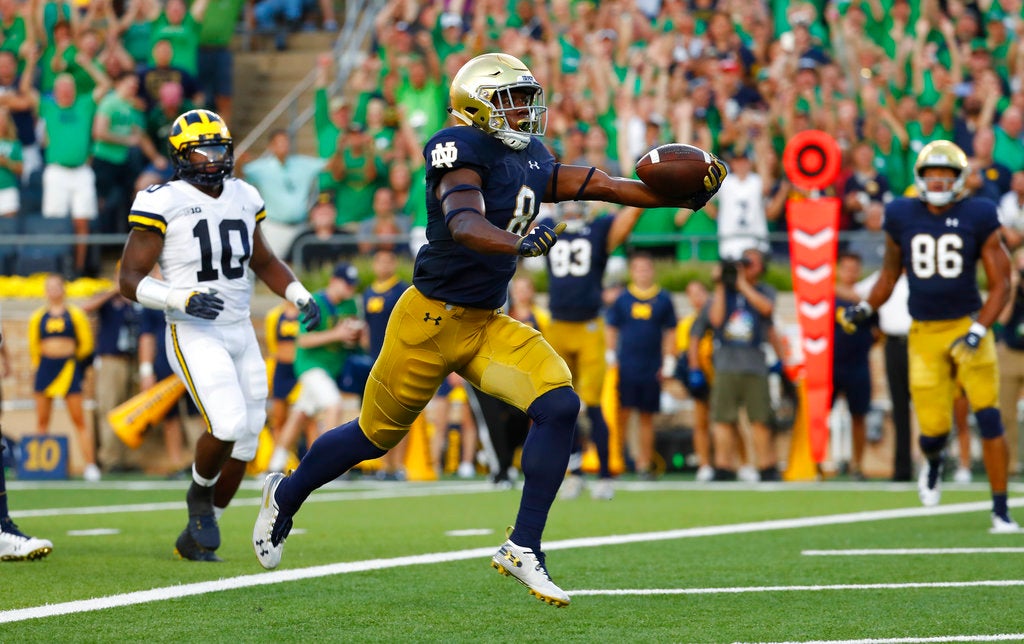 SOUTH BEND, Ind. (AP) — Brandon Wimbush connected on a long touchdown pass to help No. 12 Notre Dame jump out to a big first-half lead, Te’von Coney and the defense made it stand with a late takeaway, and the Fighting Irish beat No. 14 Michigan 24-17 on Saturday night as the rivalry returned after a three-year hiatus.

A Green-out crowd welcomed the Wolverines back to Notre Dame Stadium and the Fighting Irish scored fast on their first two drives against a defense loaded with future NFL draft picks. Chris Finke hauled in a deep throw from Wimbush that went through a defender’s hands in traffic for a 43-yard score to put Notre Dame up 14-0 midway through the first half.

Jafar Armstrong’s second touchdown, a 4-yard run with 3:55 left in the second quarter made it 21-3. Ambry Thomas gave the Wolverines a much-needed jolted with a 99-yard touchdown on the ensuing kickoff, but otherwise the Michigan debut of quarterback Shea Patterson was mostly disappointing.

Michigan’s only offensive touchdown came with 2:18 left in the fourth quarter, when Karan Higdon rushed in from 3 yards to cut the lead to seven.

Patterson, the touted transfer from Mississippi, went 20 for 30 for 227 yards and faced steady pressure. Michigan got a final opportunity with 1:48 and got as far as its 45. Patterson was flushed out of the pocket, grabbed by Jerry Tillery and stripped by Khalid Kareem. Coney recovered the loose ball with 46 seconds and sealed Notre Dame’s second straight win against the Wolverines.

When they last met in 2014, Notre Dame snapped Michigan’s streak of 365 consecutive games without being shut out with a 31-0 win. That loss also marked the beginning of the end of Brady Hoke’s tenure as Michigan coach.

Wolverines coach Jim Harbaugh does not come into this season fretting his job, but make no mistake his program could use a change in trajectory. The Wolverines are now 9-9 in their last 18 games and Michigan has dropped 17 straight road games against a ranked team, dating to 2006. Harbaugh also fell to 1-6 against the school’s biggest rivals, Ohio State, Michigan State and Notre Dame.

Michigan: The addition of Patterson was supposed to make a vanilla Michigan offense more dynamic, but until the line play improves there is only so much that can be expected from the former five-star recruit. Patterson’s lone interception came on a play when both the running back and center whiffed on a blitzing Coney.

Notre Dame: Have to give some credit to the Irish defense, a unit that returned most of its best players from last season and but has a new coordinator in Clark Lea, who was promoted when Mike Elko left after one season for Texas A&M.

Michigan: The Wolverines return home to face Western Michigan. They have a chance to string together a few victories over the next month, but it will be the middle of October before Michigan gets another chance to show it can win big games.

Notre Dame: The Irish are home for Ball State in what looks like the softest spot on their schedule.