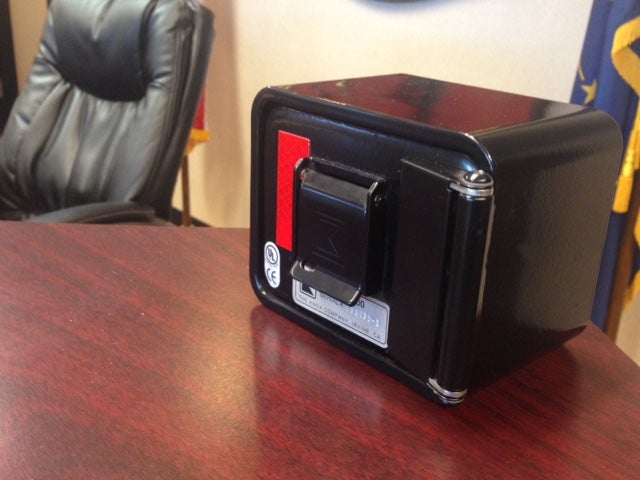 GREENFIELD, Ind. (WISH) —  The Greenfield Fire Department is looking for a way to expand a program aimed at keeping elderly people in the city safe.

The program allows first responders to get inside a home faster if the homeowner can’t open the door on their own. The department is cutting response time by using a simple box, called a Knox Box.

“If we have them [Knox Boxes], we’ll go install them on their door, and lock their keys in them,” said Greenfield Fire Chief James Roberts.

Each box hangs person’s front door, with house keys locked inside. In case of an emergency, crews will be able to unlock the box with a master key. The crews can then take the house keys out of the box and use them to quickly get inside the home.

24-Hour News 8 went along with Chief Roberts to install a Knox Box on Charles Gambrel’s apartment. Gambrel is a widower who lives alone in Greenfield.

“I think I’m in perfect health, but jeez, who knows? Something could happen in the next hour,” said Gambrel.

If something did happen, Gambrel wants to know help can get inside quickly.

“My apartment is somewhat secluded and it’s difficult to find,” said Gambrel.

That’s just another reason he says it’s important his keys are easy to find, stored in the box on his front door. Dispatchers have a database with the information for each Knox Box location. If an emergency call comes from that address, dispatchers will tell emergency crews to have the master key ready.

“We know going there, we have our key out and ready. We go in and unlock this box, get their door key out and open [the door] up. It gives them peace of mind that we can get in,” said Roberts.

Crews can get inside the home without knocking down the door. It saves money on future repairs, but most importantly it saves time.

The keys are at easy access for crews with the master key, but nearly impossible for anyone else to open.

“That key box is like a safe. It is very very heavy, it’s hard to access. You could take a hammer, sledge hammer, beat it — you’re not going to get it opened up, ” said Roberts. “It’s virtually impossible to destruct that box and get that key out of it.”

Copies of the master key are inside little vaults in Greenfield ambulances and fire trucks. Crews need a code to open them up. If the master key is ever outside of the vault, a strobe light flashes inside the truck. The light is a reminder for first responders to put the key back in the vault. Chief Roberts said it’s another precaution so the keys don’t end up in the wrong hands.

“It is done very well. It’s very well made, so they can feel secure only we [emergency crews] are going to have access to their residence,” said Roberts.

Gambrel hopes his Knox Box never needs to be opened, but he is thankful it’s there.

“This makes me feel more safe and secure and at ease,” said Gambrel.

The Greenfield Fire Department told 24-Hour News 8 no taxpayer dollars were used to start the program. It was paid for with grant money. The program was so successful, there’s now a waiting list of people who would like the Knox Boxes.

“Ideally we’d be able to outfit every house that asked, for whoever needed it,” said Roberts. “It’d be great if we got more donations to be able to go buy more.”

If you live in Greenfield and you’re able to pay for your own box, you can contact the fire department and get one for about $200.