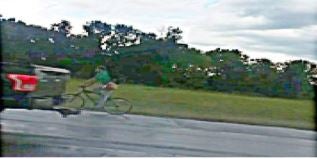 INDIANAPOLIS (WISH) –Greenfield Police are asking for the public’s help in identifying a man who they say pointed a weapon at an officer on Saturday.

In a Tweet issued Monday, Greenfield P.D. asked for the public to help identify the man a witness observed point a handgun at an officer who was on routine patrol last Friday morning.

The witness tells police the same man was also seen approximately 5 later that same day near the Washington Village Apartments on U.S. 40.

The cyclist is described as a white male, 30-40 years old with a short beard and blonde hair pulled back into a bun. He was wearing blue jeans and an aqua colored polo shirt and was carrying a dark colored backpack and a brown shoulder bag.

The officer was not injured.

Anyone with info is asked to call Detective Ron Chittum with the Greenfield Police at 317-325-1284 or rchittum@greenfieldin.org.