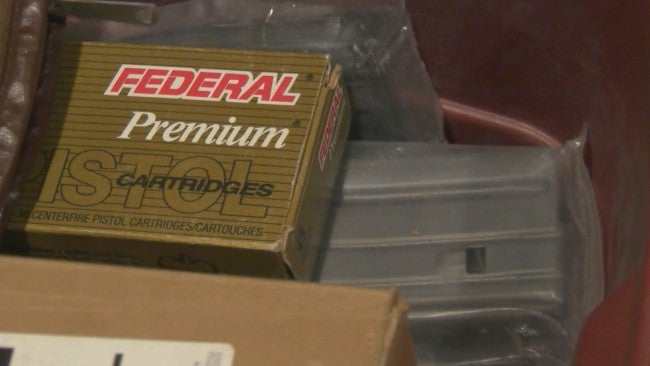 GREENWOOD, Ind. (WISH) — A Greenwood man says someone broke into his house and stole 21 firearms. Now police are trying to catch the thief.

Tony Jordan said his suspicions started Friday when one of his firearms wasn’t where he remembered putting it. Sunday night, he searched his Highland Park home and realized the guns were missing.

He said he was up all night wondering who did it.

“It had to be somebody who knows me, (who) knows the house,” Jordan said.

According to Jordan, there were no signs of forced entry. He suspects the thief is someone who knows his security code.

“You just can’t trust anybody, I guess,” he said. “That’s what is sad. I trust everybody. It’s just very upsetting.”

Jordan has his suspicions, but he’s hoping one of his four security cameras will tell him exactly what happened. He said he has to contact the security company to see the video and he’s hoping to watch it Tuesday morning.

“That camera up there catches the whole side of the house,” he said, pointing to one of the cameras. “You can’t walk around my property anywhere without being filmed.”

Jordan’s been collecting guns for 28 years. He said the stolen guns are worth more than $30,000, but it’s not just about money for him.

“There was stuff I was going to pass down to my family, to my son,” he said. “We enjoy going to gun ranges.”

Not all of the guns were taken, and nothing besides firearms were taken. Jordan said he suspects the thief left some of the guns to keep him from noticing.

Anyone with information is asked to contact the Johnson County Sheriff’s Office at 317-346-4604.