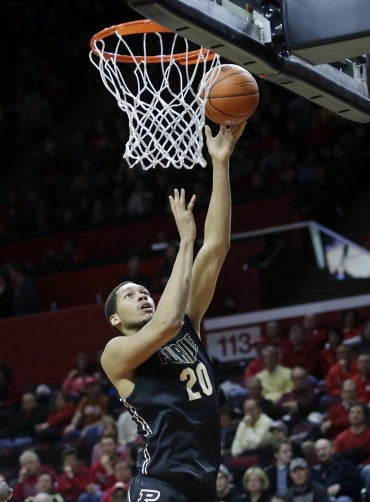 PISCATAWAY, N.J. (AP) – A.J. Hammons scored 17 points and Purdue held Rutgers to 33 percent shooting from the field in posting a 61-51 victory on Thursday night, sending the Scarlet Knights to their ninth straight loss.

Rapheal Davis added 13 points and five rebounds as the Boilermakers (16-9, 8-4 Big Ten) won for the fifth time in six games and surpassed their win total from last season. Purdue went 15-17 last season in finishing last in the conference.

Kadeem Jack had 16 points and eight rebounds to lead Rutgers (10-16, 2-11), which has not won since knocking off then-No. 4 Wisconsin on Jan. 11. The losing streak is the longest for the Scarlet Knights since dropping nine straight in the 2009-10 season.

Purdue’s defense was the difference in this game, although Rutgers certainly didn’t help itself with its shooting in the first half. It was 4 of 18 from the field and 6 of 13 from the free throw line.

Scarlet Knights leading scorer Myles Mack summed up the team’s frustration. He missed two breakaway layups in the half after steals with one of the misses coming after he missed the front end of a 1-and-1 chance.

Despite its poor shooting, Rutgers tied the game at 12-all on a jumper by Mack with 12:39 left in the half.

Purdue then went on a 13-1 run with Kendall Stephens hitting a go-ahead 3-pointer, and Davis converting a three-point play and a layup to open a 20-12 lead.

After Jack made 1 of 2 free throws, Hammons scored on a rebound dunk and a free throw and Dakota Mathias hit a spinning layup to cap the run.

Purdue: The Boilermakers snapped a seven-game road losing streak in the month of February. Their last away win in the month was against Penn State on Feb. 5, 2013.

Rutgers: The Scarlet Knights’ 16 first-half points were a season low. The previous low was 18 against Virginia, in a game in which they scored a season-low 26 points.