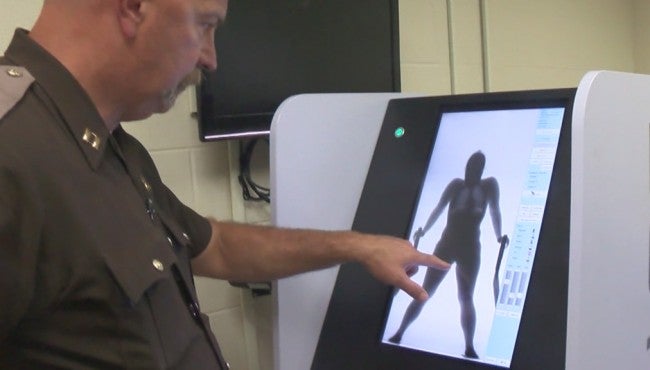 Jail Commander Andy Craig said the scanner has detected about 60 items so far this year including drugs, a cellphone, tobacco and lighters.

“When I see that, I’m glad we got the machine. It prevents it from going into the block and having overdoses or people dying in the block from overdoses,” Craig said.

Hancock County and the jail paid a total of $120,000 for their scanner, and Craig said it is worth every penny.

Craig said, in 2015, 17 people made it through book-in with drugs later found in the jail.

So far this year – the first year with the scanner – fewer than six people snuck in any contraband.

The Marion County sheriff recently said his team is considering buying a body scanner after a string of suspected inmate overdoses. He said inmates are smuggling drugs into the jail by swallowing the bags, and medics rushed multiple inmates to the hospital throughout August after suspected overdoses. The staff is urging state leaders to provide more funding.

“We’re dedicating a lot of resources, a lot of manpower, a lot of extra terrain,” Marion County Sheriff’s Department Lt. Col. James Martin said. “We’re going through more doses of Narcan to try to deal with this.”

Narcan is a device that delivers an opioid-overdose antidote called naloxone.

The Hancock County machine is precise enough to detect the bullet shrapnel in a shooting victim’s leg. But Craig said not even the scanner will stop inmates from trying.

“It’s more surprising that, when these things have been where they’re at, they’re putting it in their mouth,” Craig said. “That’s how bad they want the drugs. It doesn’t matter.”

Craig said there is room for error. Some items aren’t clearly visible on the scanner and, on a busy day, the staff can miss something.