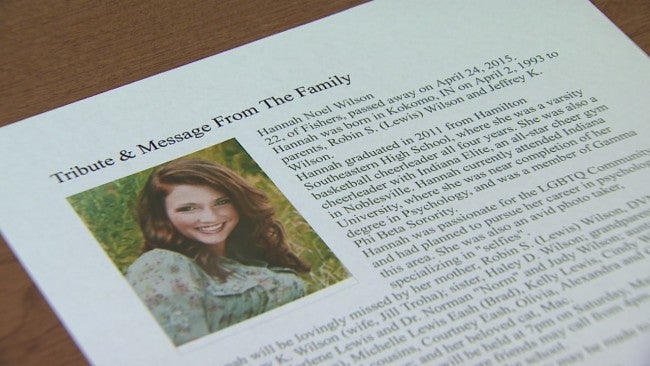 BLOOMINGTON (WISH) — Family and friends say Hannah Wilson was passionate about raising awareness when it comes to issues within the LGBTQ community.

24-Hour News 8 learned that Hannah had a strong desire for social justice. The psychology major at one point spent a lot of time volunteering on campus, providing help to students during time of need.

It was in the office of the Gay Lesbian Bisexual Transgender Student Support Services where Hannah Wilson, 22, made a lasting impression on some people like Doug Bauder.

“I’m remembering that Hannah came in one day a week for a couple of hours and just held court out in our front office,” said Doug Bauder, office coordinator for GLBT Student Support Services.

Bauder has been the office coordinator for many years at Indiana University. He said it was back in the fall semester of 2013 during the Freedom Indiana movement when Hannah asked to volunteer.

“I found it interesting that she was very proud of her sorority connections. We’ve done work with sororities and fraternities over the years, but it’s not the typical sorority student who wanders in here asking to volunteer,” said Bauder.

“She really became in my mind a kind of symbol of so many people of her generation. Similarly the Freedom Indiana movement, which several hundred students were involved in here, was mostly straight students who had gay friends,” said Bauder.

Hannah’s family has asked for any memorial contributions to be made out to one of two places, including the Indiana University GLBT Scholarships Campaign.

“She clearly let her family know this was something she felt about. They’re reaching out to us just added to my sense that Hannah was remarkable,” said Bauder. “I mean, she again cared about college life, but she also has a passion for social justice. She shared that with her family, which again not everyone does.”

Money raised from the campaign will help IU students who have been cut off financially from their family after revealing their sexual orientation or gender identity.

“The added sadness of this being graduation weekend coming up next weekend, she was just on the edge of what I’m guessing would have been a promising career,” said Bauder.

The goal of the GLBT Scholarships Campaign is to raise one million dollars to help students with tuition.

Click here for more information about the campaign or if you would like to help in memory of Hannah Wilson.