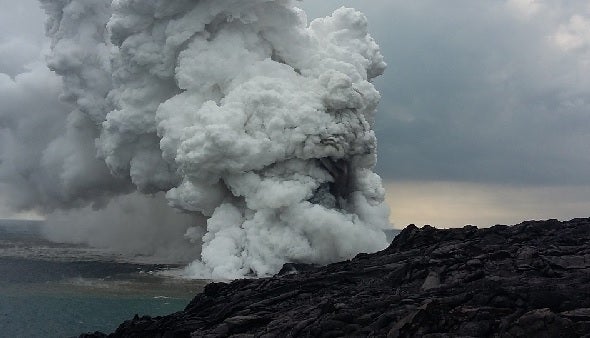 HAWAII (KHON) — Park rangers say a group of visitors had a close brush with death over the holiday weekend after ignoring warning signs and ducking under ropes on the coastal cliffs of Hawaii Volcanoes National Park.

The collapse started around 2:45 p.m. New Year’s Eve Saturday as a section of the 26-acre lava delta collapsed into the ocean at the Kamokuna ocean entry of the park.

It was an amazing sight as huge plumes of volcanic rock launched into the air. A large section of the lava delta broke off into the ocean, at times creating waves up to four stories high. The flurry of waves also eroded away a portion of the older sea cliff and viewing area.

Around 7 p.m. Saturday, five visitors tried to enter the roped-off area and had to be chased out by park rangers. Within 15 minutes, the section of the cliff where the visitors had been standing crashed into the ocean.

“It was a really close brush with death for them,” park ranger Trevor Delimont said. “Luckily, they finally listened to us and turned around in time.”

It was an act of defiance that could have turned into something much worse, and luckily everyone is safe. But park rangers say the visitors endangered their own lives as well as the lives of the people who had to bring them back to safety.

Park spokeswoman Jessica Ferracane says there were signs over the past several weeks that the collapse was imminent, and flyovers by USGS officials convinced them something like this could happen.

“Our mission is to provide safe access to active volcanoes,” she said, “and we want to continue to do that, but we don’t want people to get hurt. These closures are there for a reason.”

Because of the collapse, the Kamokuna ocean entry within the park will remain closed as park rangers and USGS Hawaiian Volcano Observatory scientists survey the area. Loud cracks continue to be heard throughout the unstable area.

The County of Hawaii has also closed the Kalapana access to the park. There is a temporary flight restriction of 1,000 feet above ground level at the Kamokuna ocean entry.

Lava deltas are extremely hazardous volcanic features and are formed when lava enters the ocean and builds new land on loose and unstable substrate. In addition to the threat of collapse, lava entering the ocean produces a highly corrosive plume of hydrochloric acid and volcanic particles that irritate the lungs, skin and eyes. Visitors are strongly urged to stay out of closed areas and heed all posted warning signs.

by: Annessa Chumbley / 25 mins ago