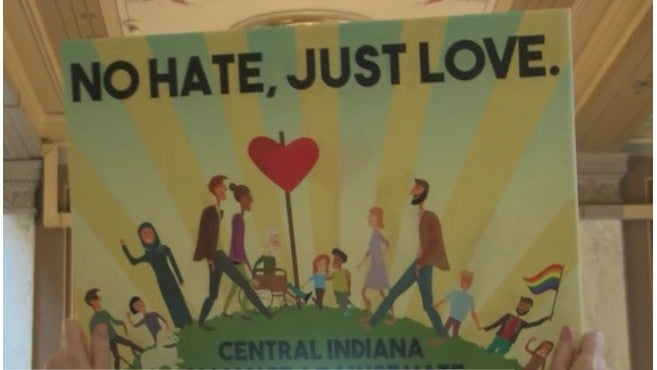 INDIANAPOLIS (WISH) – Indiana is one of five states without a hate crime on the books, but state lawmakers earlier this year decided the topic was worth a summer study.

“In Indiana, they’re on the rise,” said Tony Gillespie, vice president of the Indiana Minority Health Coalition. “Nationally, hate crimes … 50 percent of those cases are African-Americans, and Muslims, LGBT and Hispanic/Latino round out the remainder.”

Gillespie is part of a statewide movement to get hate crime legislation passed. For years, he’s watched it fall flat in the Statehouse.

But this time, he said, “We’re very excited. Summer study, while there’s not a law in place, it really provides an opportunity to really open up an issue and begin to unpack what the other considerations are and should be. And certainly there’s a definite minority impact when we talk about hate crimes.”

Gillespie said the coalition hopes lawmakers talk about how trauma from a bias-motivated crime dovetails into public health.

“That kind of trauma that comes out of a hate crime creates stress that leads to hypertension, heart disease, all the chronic conditions that we know disproportionately effect minorities,” he said.

There are lawmakers and Hoosiers who say hate crime victims are already covered under state law.

Gillespie said, “I think if we were able to engage the community around the state in that process, I think we’d find out something different.”

The Interim Study Committee on Corrections and Criminal Code will hear from people on the issue and make a recommendation ahead of the 2019 session.