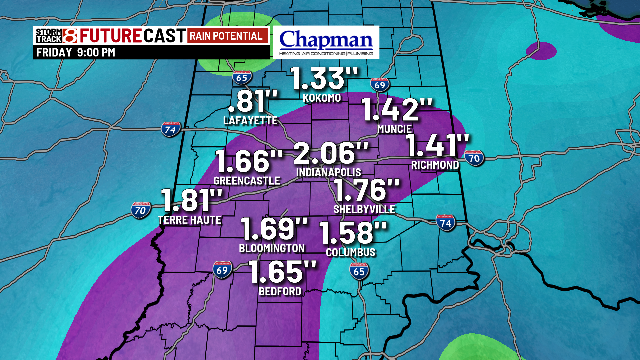 INDIANAPOLIS (WISH) — Several rain chances move into central Indiana for the second half of the work week.

Clouds will slowly increase across central Indiana this evening, ahead of our next storm system.  Can’t rule out a stray shower or two before daybreak, but otherwise, we are dry and mild.

Wet weather to fill in across the state starting in the morning.  Showers will likely be isolated to scattered early on.  A few heavy downpours can’t be ruled out.

Heaviest rain arrives as early as Wednesday afternoon – and the window is open for heavy rain through the rest of evening and overnight.

Precipitable water values will likely reach up to 2″ – meaning widespread steady/heavy downpours are likely during this time frame.

In addition to the heavy rain threat, the Storm Prediction Center has the southern half of the state under a marginal risk for severe storms.  Large hail, damaging wind, and even an isolated tornado can’t be ruled out.

High temperatures only hit near 80° -and it may even be a struggle to get to that point for areas that see several batches of rain.

More rain for the early morning to early afternoon hours, with again, heavy pockets of precipitation possible.  Showers should become a bit more scattered as the axis of steady rain starts to shift to the southeastern portions of the state.

Highs top out in the lower 80s.

With the addition of a few isolated showers and storms on Friday, the three-day combination could likely net between 1″-2″ of new rainfall for much of central Indiana to close out the work week.  Luckily, it won’t all come at once, and considering how dry many areas are, major flooding shouldn’t be an issue – but areas that are prone to flooding issues under heavy rain should keep a lookout for issues – especially Wednesday afternoon through Thursday morning.

More rain chances to open up the weekend on Saturday.  Sunday appears to be dry and warmer, with highs in the middle 80s.  Storm chances return Monday afternoon into Tuesday morning.