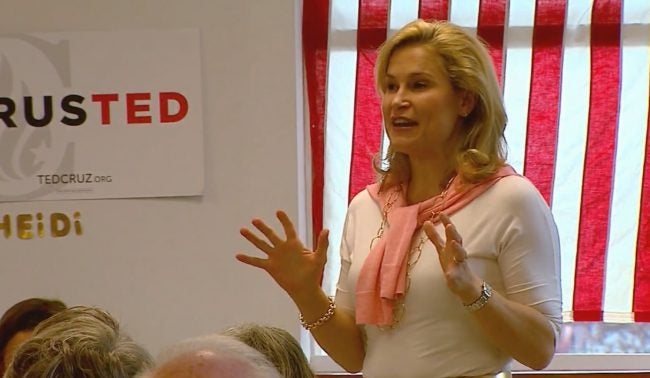 His wife Heidi remained here to put in a full day of campaigning.

It was Heidi Cruz’s job to energize Ted Cruz supporters and campaign volunteers. She made appearances at Cruz campaign offices in Clark County, Evansville and in Indianapolis.

She paid a visit to the Cruz state headquarters on 59th Street in Lawrence. It’s an operation that first opened 10 days ago on the second floor of an office building.

“Ted won the women vote and the millennial vote in so many states,” she told a crowd of supporters. “It’s important to remember that we can win with this coalition and there are other people in the race who are not bringing people together like that. Five candidates have supported this race because they understand this race is about you.”

Heidi Cruz told the crowd that she will be in Indiana over the weekend.

Ted Cruz is believed to be behind Donald Trump in Indiana but still within reach. Heidi Cruz told the Lawrence crowd that nothing is more important than Indiana right now.