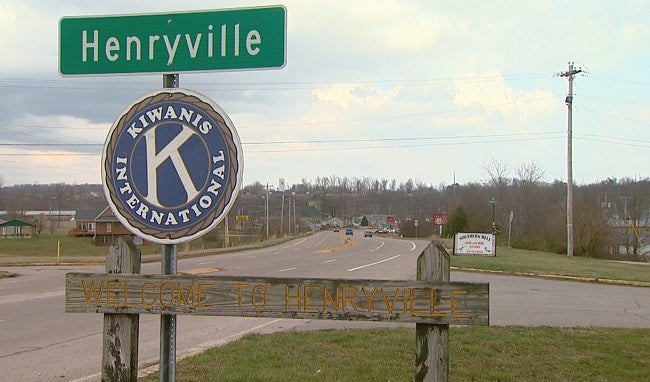 HENRYVILLE, Ind. (WISH) — It has been exactly five years since an EF-4 Tornado hit Henryville, Indiana. The violent twister was on the ground for almost 50 miles, leaving a trail of destruction in its path.

The tornado outbreak of March 2 and 3 is still the largest continuous March tornado outbreak on record in the United States. This particular tornado, which initially touched down near Fredericksburg and traveled 49 miles to near Bedford, Kentucky, was the most deadly of the 70 tornadoes those two days. A dozen people fell victim to this particular storm.

Five years later, the scars still remain and the memories from those who weathered the storm are just as clear today as they were when disaster struck this Clark County community half a decade ago. I visited Henryville on Wednesday to see how the Henryvillians have managed to pick up the pieces and to see what memories they could share from that day.

I managed to track down three people who were in town that day with three very different perspectives. However, all three recalled the day starting off like any other March day, albeit very warm.

“It was a normal day, my normal routine, studying and whatnot. I had a meeting at lunch time with a friend, a fellow Henryvillian, over at the pizza place,” said Toby Jenkins, pastor at the First Baptist Church on Francke Road.

Michael Hemphill, a former Henryville firefighter said, “It started slow, like any other day, and then we got a call from the lieutenant down at the fire department that we had strong storms coming in. They wanted us to stage at the fire house, in case something bad happened.”

The principal of Henryville High School, Troy Albert, recalled, “The sun was shining. Just a normal school day and then about 2:25, everything went into emergency mode.”

Toby and his friend quickly finished up their lunch when the warning went out.

“We heard there was a storm coming, finished up eating and left… and just felt there was something different about this storm,” Jenkins said.

His gut feeling was right. Just moments later, an EF-4 tornado with winds up to 175 mph would race down Highway 160 towards Henryville.

“It was pretty rough. It’s kind of funny that you see people on television describing the storm, and they actually do sound like a big freight train,” Jenkins said.

Inside the high school, Troy had been working feverishly to get remaining staff and students to a safe spot. They followed their emergency plans by hiding in the office.

“There was a loud…kind of like an explosion. We were one wall away from being in the debris,” Albert said.

On the south side of Highway 160, the “less damaged side,” Toby Jenkins had been ushering fellow parishioners and townspeople into the church’s large basement. He estimated nearly 200 people showed up that day to seek refuge. He remembered the loud roar from the tornado.

“It was just coming through, and it was just loud… it was hard to even think straight,” Jenkins recalled.

After the tornado passed, the rear flank of the storm and winds gusting to 70 mph or more slung hailstones as large as baseballs through windows and siding, adding insult to injury. Shortly thereafter, residents began to emerge from the wreckage and got their first glimpses of the disaster.

“It’s just ironic, that just hours after we had lunch at the pizza place, it was gone,” said Toby.

Michael was still in shock after he watched the tornado go by from his fire station vantage point.

“It was unbelievable how it could take roofs off and just demolish buildings. Once the initial shock of the destruction that I saw it doing was over, then I realized, hey there’s a lot of people that are probably going to be hurt,” Hemphill said.

He and the rest of the emergency responders quickly went into action.

Over at the high school, the funniest thing Troy remembers hearing came from one of the youngest taking shelter. He recalls the little girl walking into the main hallway filled with debris and spotting a book.

“What do I do with this book,” she asked? His administrative assistant told her, “You can just leave that there honey, let’s go,” Albert said.

As Pastor Toby emerged from the basement, his first thoughts were, “It became really serious, because lots of the people who were here in the church, their homes are all around here. One of my deacons and his wife, their house was just across 160. When we emerged out, you could tell, it just looked like it was more severe in that direction. She was like, “Pastor Toby, will you please just walk with me up there and see if my house is still there?” I had already been out, checking on people and looking for people. I already knew their house wasn’t there.”

With a large amount of the town broken and scattered by the storm, they could easily have given up, packed their bags and tried to start over again somewhere else, but not Henryvillians. They’re a resilient bunch, and they’ve made quite a comeback in the five short years since I was there, myself, photographing the immediate aftermath. The community is now stronger than ever.

“The people have rebuilt. There were homes that were getting older that needed to get rebuilt, and due to the tornado, the owners were able to rebuild it. It’s just a sense of community. I wouldn’t say the large towns don’t have it, but here, if there is a problem on this side of town, people on the other side know about it and they’ll come help. We resolved to stay, we resolved to rebuild the town and we have,” said Hemphill.

The entire outbreak is estimated to have taken 41 lives and cost over $3 billion, but just five years later, it appears as though this Clark County community is doing better than ever. The pizza place, the high school gym and the local diner have all been rebuilt, while some structures have been removed entirely. Overall, most people I talked to seem to have the opinion that Henryville is now more of a community than ever.