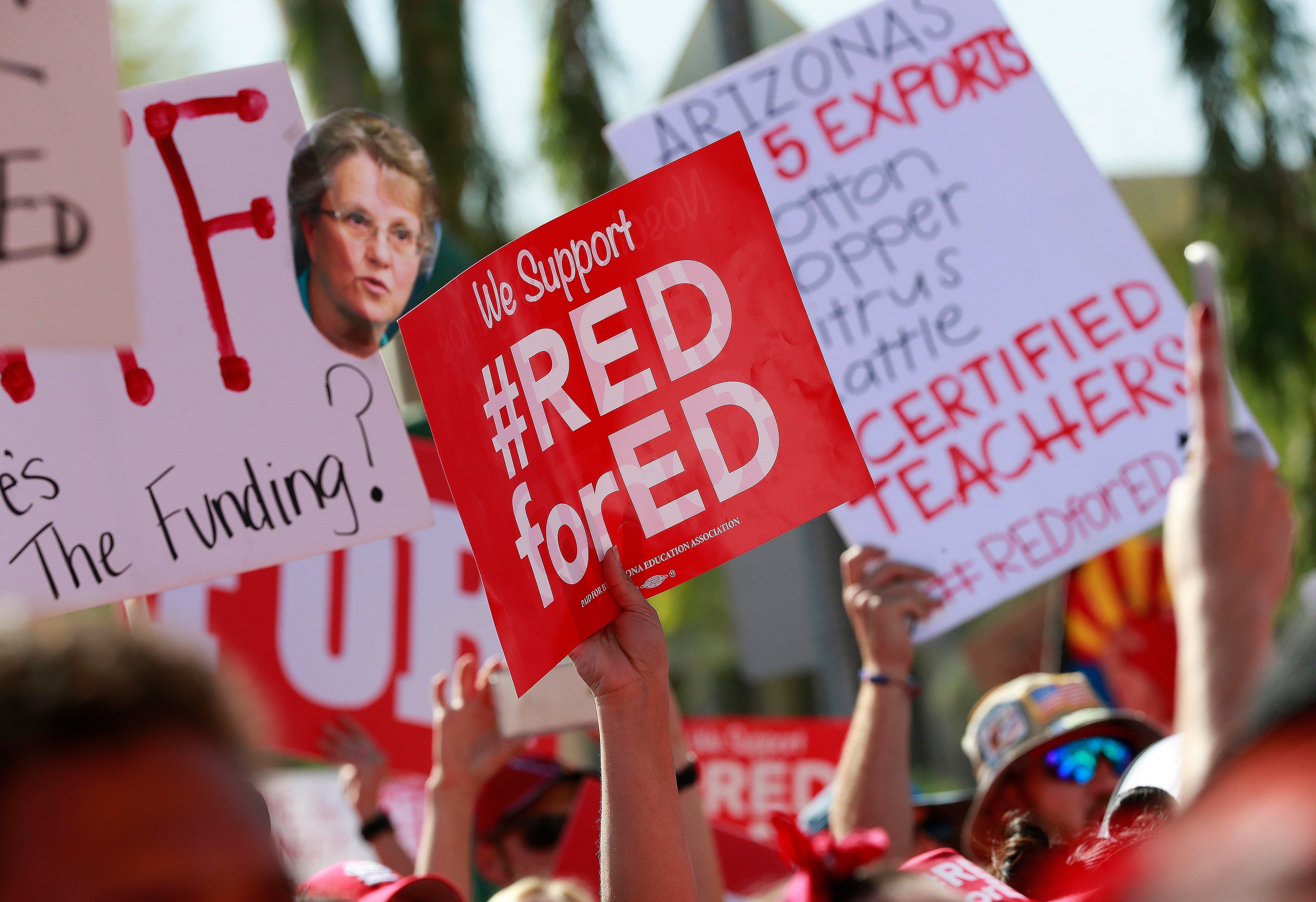 PHOENIX (AP) — As thousands of teachers and supporters gathered at the Arizona Capitol to protest inadequate public school funding for a second day Friday, Gov. Doug Ducey again skipped the chance to address them.

Instead, the Republican governor’s public relations machine sent out links to a series of interviews the previous day with TV news reporters where Ducey pushed his plan to boost teacher pay by 20 percent by 2020, talking point by talking point.

The scene was far different Friday in Denver, where several thousand teachers gathered for a second day to protest low education funding were greeted by Democratic Gov. John Hickenlooper. He said he would work to have the state repay all of the approximately $1 billion borrowed from education during the recession.

“We see you. We hear you,” said Hickenlooper, who wore a red checked shirt and spoke for less than five minutes. “We are working with you, not just today.”

However, Hickenlooper didn’t offer any funding above what has already been proposed for next year. Some teachers shouted over him “We want more,” while others applauded his pledge.

Ducey, who is seeking re-election this year, never showed up to address the 50,000 educators and supporters Thursday or the thousands who were at the Capitol on Friday. He has called the leaders of the grassroots group that organized the walkout with the Arizona Education Association politically motivated.

“He’s not listening,” said Kelly Grant, a Mesa teacher. “There’s five demands, there has been from the beginning. So we just want someone to sit down with our people, make some effort. They’re not making an effort.”

Ducey has refused to meet with walkout leaders, instead inviting a handful of selected educators to meetings. Just two weeks ago, he was ignoring the demands of teachers who began protesting in early March, after educators in West Virginia went on strike and won big raises. Educators in Oklahoma and Kentucky followed.

In a surprise move on April 12, Ducey tried to sideline the protests by announcing he had found a way to boost teacher pay by 9 percent this year, followed by 5 percent raises in 2019 and 2020. He also is counting a 1 percent raise he gave last year to come to the 20 percent figure. That would cost about $650 million a year by 2020 in a state that has consistently cut taxes as the governor moves to shrink government and enact more tax cuts.

Ken Bennett, a former secretary of state and Arizona Senate president who is challenging Ducey in the Republican primary, said he thinks the governor has been “playing politics and not being straightforward with people.”

“For months he told us there’s no way we can afford a 20 percent increase, and then I think when the political winds started to get too heavy all of the sudden he turned 180 degrees and said we can do it,” Bennett said as he gathered signatures at the teacher rally. “But I believe we’ve to show people a reasonable and sustainable way to pay for it, and he hasn’t done that” suggesting a broadened sales tax or closing loopholes.

But teachers like Grant who have organized in a grassroots movement never seen before in the state are not bending. They want not only the 20 percent raise, but better pay for support staff, yearly teacher raises, a restoration of school funding to 2008 levels and no new tax cuts until the state per-pupil funding reaches the national average.

Carrie Deahl, an English teacher in the Phoenix Union High School District, said she was disappointed that the governor and Legislature weren’t meeting with the organizers of the #RedforEd movement.

“The governor can’t even come out of his office and have a conversation with us, and yet he’s saying he’s the education governor,” she said. “That’s mixed messages you’re sending the public and the country about who you really are and what your priorities are.”

Arizona teachers are among the lowers paid in the nation. Schools that educate the vast majority of the state’s 1.1 million public school students closed Thursday and Friday as teachers walked off the job.

Arizona Education Association President Joe Thomas told educators on Friday they may need to come back Monday to keep the pressure on lawmakers and Ducey as they negotiate a state budget package.

He also told them there may be an effort to go to the ballot to get a new “dedicated funding stream” to help restore $1 billion if K-12 education cuts lingering from the Great Recession. Leaders of the grassroots group Arizona Educators United planned to survey members over the weekend on whether to continue the walkout. Some school districts in the Phoenix area said Friday they will be closed Monday.

A plan to increase income taxes on high wage earners was filed as a ballot initiative on Friday by a separate group of education funding advocates. That could be put to Arizona voters this fall, and organizers of the #RedforEd movement say they’re polling their supporters to see if they would get behind the plan.

In Colorado, some classes were cancelled for the second day Friday. Teachers there are fearful that changes to the state pension system will further harm their income. They are also disturbed at education funding that lags behind the national average. While lawmakers are working on changes to the pension system, any increases in taxes to fund education must be approved by voters. Voters could see an initiative on the ballot.

Associated Press reporters Melissa Daniels in Phoenix and Colleen Slevin in Denver contributed to this report.