Hidden History: The Arrival of the Conquistadors 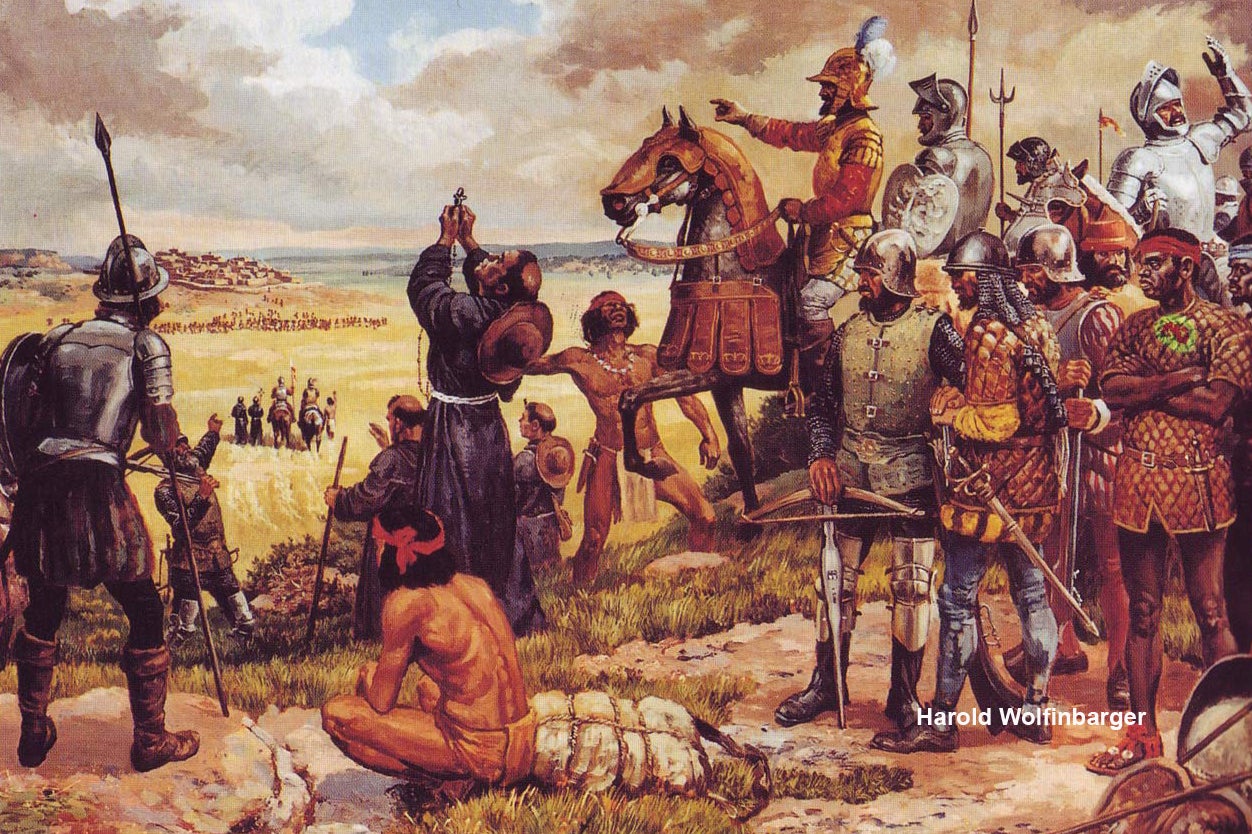 Long before the 1540 arrival of Francisco Vasquez de Coronado, the very first conquistador to venture into what is now New Mexico, the towering Zuni Pueblo village of Hawikku was the center of Zuni Pueblo society.

Once seven stories tall, the ancient village is now just a series of mounds of stones and dirt.

“Hawikku in the 1500’s was a vibrant community,” said Jim Enote, director of the A:shiwi A:wan Museum and Heritage Center in Zuni. “Hundreds of people were involved in arts, in agriculture, in construction – building homes… When the Spanish arrived, things changed dramatically.”

“We had to conform to some of the Spanish ideas and their authority,” he said.

In July of 1540, Coronado was following up on a visit to the Zuni area the year before by Fray Marcos de Niza and Esteban the Moor. That duo was searching for the riches of the fabled Seven Cities of Cibola. Esteban was killed at Zuni and the friar went home to New Spain to report he saw a shimmering gold city in the distance.

Anxious to repeat the Spanish conquest of the Aztec world, Coronado was disappointed when he arrived at Zuni the following year to find only poor natives living in earthen communities. Coronado’s massive expedition quickly conquered the Zuni and the pueblo became Spanish headquarters for the next several months.

“The blast from the musket would terrify the bravest of warriors,” said Zuni guide and archaeologist Kenny Bowekaty.

From Zuni, Coronado dispatched scouting parties that became the first Europeans to visit the Hopi people and view the Grand Canyon. Zuni people believe the canyon is where their ancestors originally emerged from mother earth into the daylight world.

In the winter, Coronado’s large expedition of people and livestock moved to the central Rio Grande valley near what is now Albuquerque. Fierce battles again ensued with the pueblo communities and many pueblo structures were destroyed. Coronado Historic Site now sits at the ruins of one of the pueblos, Kuaua.

“The Coronado expedition could have had thousands of people involved, including hundreds of Europeans, as well as indios amigos — the Meshika or Aztec warriors that were hired to come up with them,” said Coronado Historic Site Ranger Ethan Ortega.

Centuries later, scientists and volunteers at Coronado Historic Site are still probing for evidence and the effects of the Spanish occupation. Seven weeks of excavations over the summer have added new artifacts from both Spanish explorers and settlers and the Native American societies.

“We’ve thought that the history was pinned down, put in the history books and written on the museum panels, but that’s not the end of it. We’re still learning new things about this site,” he said.

After Coronado’s party returned empty-handed to New Spain in 1542, the next Spanish expedition did not reach this part of the Rio Grande valley until 1598.

In addition to battle casualties among Rio Grande pueblos, Onate retaliated against resistance at Acoma by killing hundreds of residents there and cutting off one foot of each of many of the survivors. The friction between the two cultures would continue until the pueblo revolt of 1680, when the Spanish were driven from New Mexico for 12 years.

Before that exodus, more Catholic missions were built in native pueblos, and Hispanic villages multiplied. Hispanic and Native American culture and life began to blend.

“The Spanish brought particular livestock, agricultural goods, metal, things that were useful to the Pueblos – horses, of course,” said southwestern author and journalist Carmella Padilla. “There began to be an inter-relationship almost immediately.”

“There was intermarriage. So by the time the pueblo revolt comes about in 1680, you had probably three generations of intermarriage, and very much an interchange of goods and cultural traditions,” said Padilla.

At Zuni Pueblo, the effects of day to day life were as simple as how pueblo families traditionally ate meals.

“Where everybody would eat from one bowl,” said Jim Enote. “The Spanish wanted to have individual portions.”

Today, people can experience what Spanish colonial life was like at the living museum, El Rancho de las Golondrinas, near Santa Fe, NM.

“We have a flock of churro sheep here,” said Sean Paloheimo, director of operations at Golondrinas. “The churro sheep are the sheep that Onate had with him when he came up the Camino Real into New Mexico.”

The hardy sheep were brought to provide meat, milk and wool.

“Here at las Golondrinas we have a weaving program that basically goes from fleece to blanket,” said Paloheimo.

One of those who keeps such traditions alive is volunteer colcha embroiderer Barbara Alba. With her needle, she meticulously guides thin strands of colored wool thread through a wide decorative cloth in the soft light of the interior of the Golondrinas chapel.

“Colcha embroidery is used to mend those moth-eaten or worn out blankets,” Alba said. “What is used is this cloth, sabanilla that is spun and woven from the churro sheep…We’re trying to promote our culture and things that were done back in the 1500’s,” she said.

There is a roar coming from the bellows-driven fire in Pedro Martinez’s blacksmith shop at Golondrinas. Sparks fly as his hammer strikes red hot metal resting on his anvil, painstakingly making nails by hand as other blacksmiths did in Onate’s day.

“Hinges, door locks, you name it, they were able to make it,” he said.

“Blacksmith” was a critical title in Spanish colonial New Mexico.

“He was one besides the governor that got paid by the king,” said Martinez.

Carpenter Ross Pope’s tools – axe, adz, draw knife and others — are also the same ones used in Onate’s day. As he pulls a sharp double-handled draw knife along a long, thin piece of wood, chips fly and the wood quickly takes a new shape.

“They could make spokes and chair legs – handles for their tools.”

Other craftspeople like tinsmiths, mill workers and bakers hover over other traditional creations across the grounds at El Rancho de las Golondrinas.

The facility is open to the public for nominal admission fees and regularly hosts special events.