Historic St. Mary’s Church wants to ‘Save the Steeples’ 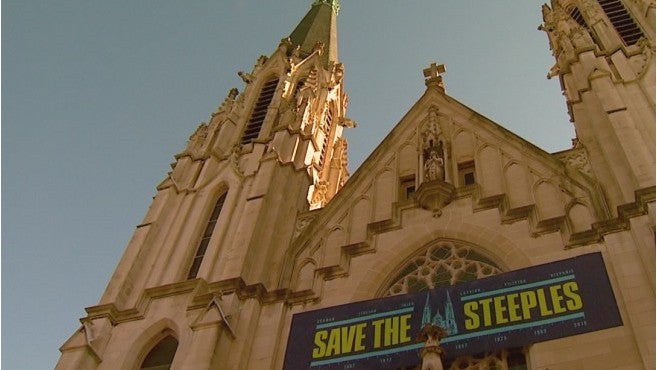 INDIANAPOLIS (WISH) — You might have seen the sign at the corner of North New Jersey and East Vermont streets: Save the Steeples.

It sits right in front of St. Mary’s Church in downtown Indianapolis. The campaign was started a couple of years ago to secure funding to preserve this historic landmark.

The church, modeled after the Cologne Cathedral in Germany, was built in 1912. It has been described by many architects as the best example of Gothic architecture in the entire country.

Over the course of time, as with any old structure, things have started to deteriorate. In need of a face-lift, the church started the Save the Steeples campaign with a goal of raising $2.1 million. So far, they have reached $1 million in donations.

The goal of the renovation is to seal the outside to prevent water from seeping in the church. Once that is done, the church leaders would eventually start fixing things on the inside. Just a few of the items on their list: Tiles missing from the ceiling. Paint starting to peel away at the walls.

If you would like to help out with a donation, go to saintmarysindy.org.