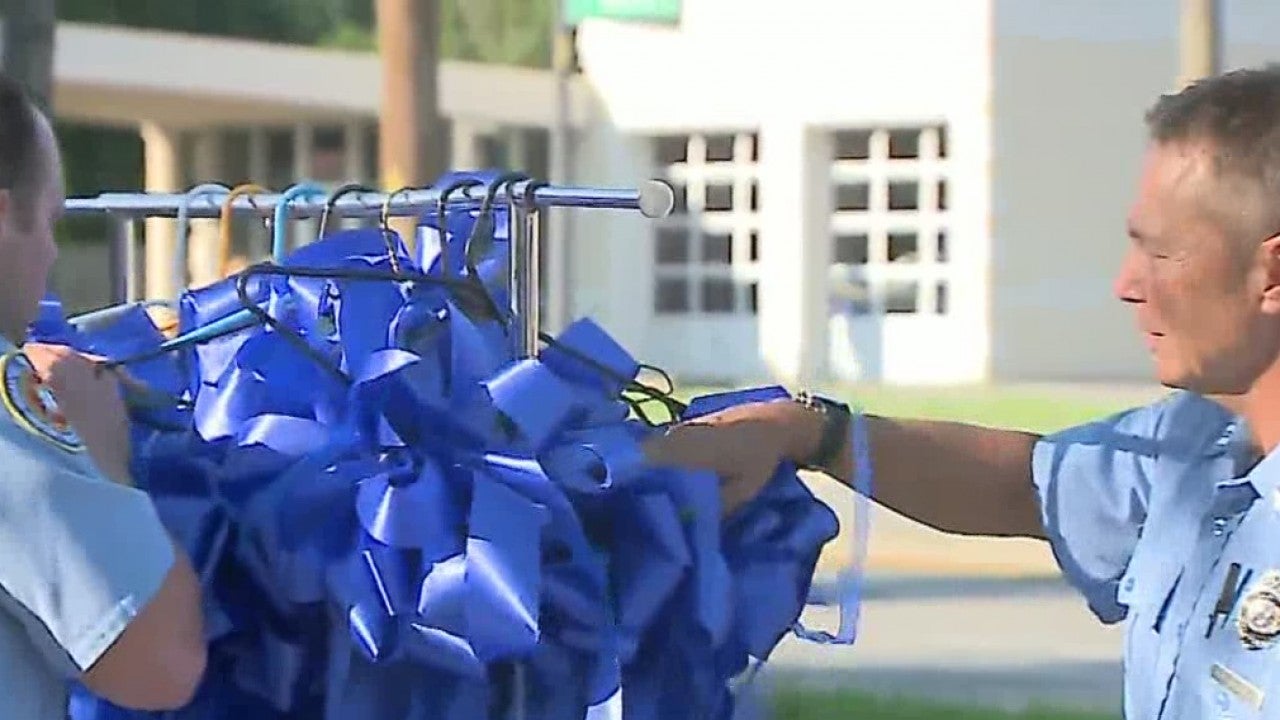 HOMECROFT, Ind. (WISH) — With 400 feet of royal blue ribbon, neighbors in Homecroft showed their solidarity with the Southport Police Department.

More than 100 people and first responders showed up to show their unity.

Those in the crowd didn’t necessarily know Southport Police Lt. Aaron Allan but saw and felt his presence in this tight-knit community.

And as they saw the tragedy unfolding before their eyes, neighbors in Homecroft said they had to do something. So they contacted Post Road English Garden, which blue ribbon that was draped on the lightposts Friday night.

“The more ribbon you drape, the better,” said Lisa Schwier, owner of Post Road English Garden, demonstrating how to tie a large bow with the thick material. “Do about seven loops on each side.”

“There’s so much bad in our world right now,” Schwier said. “I truly think the community coming together will show what we all really feel for our police officers.”

Schwier’s shop is on the east side of Indianapolis, but she used to operate a location near Southport. Some of her former customers gave her a call Friday morning, asking for assistance in assembling a visual memorial for slain Southport Police Department Lt. Aaron Allan.

“Of course, we just wanted to donate them to show our support for the family and all the police do for our community, whether east or south,” she said.

Schwier’s shop is also donating a plaque to Allan’s family, inscribed with the words “Fallen Hero” and a quote.

“Once I saw his picture, my heart sank,” said Roessler, who watched the crime scene from his front porch. “This not just hit home, but literally across the street.”

He works for TKO Graphix and knew there was something he could do to help.

“Made a quick couple calls, came in at  6 o’ clock this morning and it was already being produced,” he said.

The “it” are 300 police support decals, featuring an American flag with a blue stripe, and the phrase “#SouthportStrong #HomecroftStrong.” Roessler said 100 percent of the donation proceeds from the community family will go to Allan’s family.

“I just want to raise as much money as possible for the officer’s family,” he said.

Schwier and Roessler didn’t know Allan personally, but they said they know their community.

“I just think the families need to know how much we support the police department and what they do,” Schwier said.

“We all come together. It’s just what we do,” Roessler said. “It’s how we’re raised.”

The decals were available for donation-only purchase Friday night in the 6000 block of Madison Avenue in Southport.

Already, tens of thousands of dollars have been raised for Lt. Allan’s family.

Among those gathering Friday night was Southport Police Chief Thomas Vaughn, who told 24-Hour News 8 the number of kids in the crowd meant a lot. He says the department tries to keep a good relationship with the youth in the community, and it was reassuring to see so many families out to keep the police department strong.