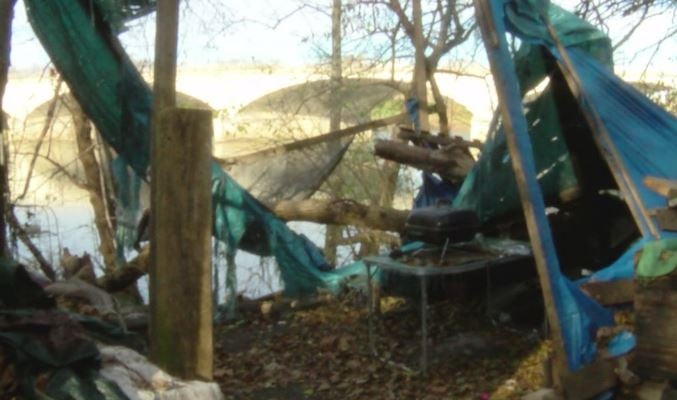 INDIANAPOLIS (WISH) – As cold weather settles in for the season, multiple organizations have made it their mission to provide resources for people experiencing homelessness.

Shelters, outreach programs and organizations work to prevent tragic casualties of the cold like the death of a person discovered Thursday night.

Police said the victim was found burned to death in a homeless camp under a bridge in Indianapolis.

According to the Hoosier Veterans Assistance Foundation, 25 percent of homeless in Indiana are veterans. In Indianapolis, that broke down to 326 men and women in 2016.

24-Hour News 8 followed HVAF worker Rodney Jackson as he checked in on homeless veterans known to the organization.

Jackson served in the Navy for 20 years and said he has a passion for helping fellow veterans who he considers to be family.

“Whether it’s homelessness, employment, getting them food, getting them some kind of medical attention any kind of financial places that I know of that can assist them. I can lead them to that. (I) give them rides. If I have bus passes I can help them out with a bus pass; any little thing to make a difference in somebody’s life,” Jackson said of his efforts.

He met a Vietnam War veteran named John who has been homeless for five years by choice.

John has lived in a makeshift camp along the White River in order to stay off the grid, he explained.

On especially cold days, John described a team of Indianapolis Metropolitan Police Department officers led by a sergeant that checks in on his camp and others.

“He’ll chase most people inside but he’ll make sure you’re alright. His men come around and they get a report of somebody that hasn’t been seen for a while, they’ll come out and check on them,” John said.

The most recent homeless count released by the Indiana Housing and Community Development Authority determined close to 6,000 people are homeless in Indiana. Of those, more than 500 people are unsheltered living on the street.