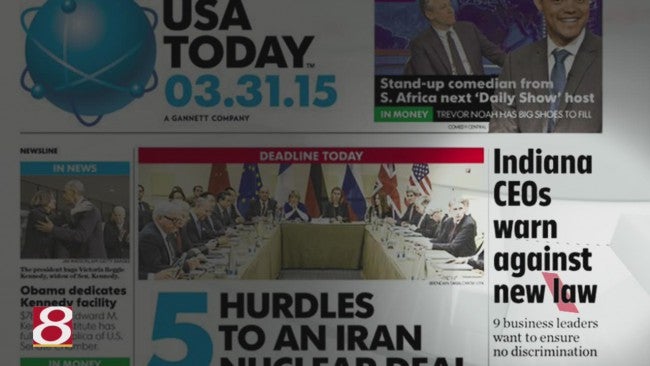 INDIANAPOLIS (WISH) – Major businesses and organizations around the state have expressed their opinions about the Republican amendments to S.B. 101, otherwise known as the Religious Freedom Restoration Act.

Many Indiana universities and businesses took a stand against the RFRA bill as it was being debated and voted on.

After Governor Mike Pence signed the RFRA bill into law, many businesses intensified their efforts to rally against the bill. Angie’s List announced a major expansion plan was being put on hold because of the bill.

With the announcement of the RFRA “fix,” many organizations and businesses wanted to go on record on the new legislation.

Butler University applauds and supports today’s proposed revisions to Indiana’s Religious Freedom Restoration Act. They represent a strong step forward and make clear that discrimination has no place in Indiana. The people of Indiana often talk about “Hoosier values.” Butler University reflects the best of those values. We believe that all people should be welcome, regardless of sexual orientation, religion, gender, race, or ethnicity. Ours is a culture of acceptance and inclusivity that began with our abolitionist founder in 1855 and continues to pervade the Butler University community today.

The outpouring of support and advocacy across Indiana over the last several days is clear evidence that these Butler values are shared by institutions, businesses, and citizens across our great state. Now the real work begins-to build upon today’s efforts to ensure our state is forever free from the taint of discrimination, and to restore our state’s reputation as one of the nation’s best places to live, visit, and do business.

Michael Huber, President and CEO of the Indy Chamber said:

“The Indy Chamber strongly urges Governor Pence to immediately sign SB50 into law. Swift action on this measure is imperative to our efforts to repair the damage done to our reputation and to our ability to maintain and grow economic investment here.”

“Indiana University expresses its appreciation and support for this clarifying language, which ensures that nothing in the Religious Freedom Restoration Act will provide legal protection for, or in any way promote or permit, discrimination in any form on the basis of a person’s sexual orientation or their race, color, religion, ancestry, age, national origin, disability, sex, gender identity or military service.  We are grateful for the hard work and good intentions of those who have earnestly labored in recent days to address this problem.”

“Our position is that this “fix” is insufficient. There was no repeal of RFRA and no end to discrimination of homosexuals in Indiana. Employers in most of the state of Indiana can fire a person simply for being Lesbian, Gay, Bisexual, Transgender or Questioning.  That’s just not right and that’s the real issue here. Our employees deserve to live, work and travel with open accommodations in any part of the state.”

“Very pleased the Indiana legislature is taking action to amend Senate Bill 101 so that it is clear individuals cannot be discriminated against. NCAA core values call for an environment that is inclusive and non-discriminatory for our student-athletes, membership, fans, staff and their families. We look forward to the amended bill being passed quickly and signed into law expeditiously by the governor.”

The long-term economic impact of RFRA will not be known for years.

The bill has divided the state and the nation on the issue and Hoosier businesses are taking a clear stand on the side of history that they believe is correct.