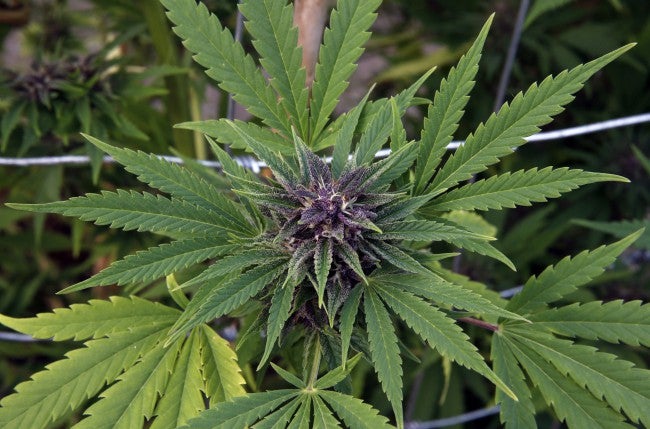 INDIANAPOLIS (WISH) – Jennifer Perkins says she feels like she’s on a roller coaster – even while standing still.

Perkins suffers from tuberous sclerosis, a medical condition that’s left small, potato-shaped tumors all over her body, including her brain and kidneys.

Perkins, who shared copies of her medical records with I-Team 8, believes the tumors might be the source of her frequent dizzy spells and seizures.

Her husband, Aaron, posted videos of Jennifer to the online crowdfunding website GoFundMe. The videos, he says, show Jennifer having seizures in their Indianapolis home.

The couple’s GoFundMe page asks members of the public to give them money in hopes of finding medical marijuana treatment outside of Indiana, where it remains illegal.

“The problem is she is suffering from severe five to 10 minute seizures on a regular basis,” he writes. “I am trying to relocate her to a medical marijuana state to get her on a high cbd strain of medical marijuana. I work, but I make only enough to pay the bills.”

Jennifer says she’s ready get off the roller coaster. She thinks medical marijuana might help.

An I-Team 8 investigation found they’re not alone. In fact, thousands of people across the country – including many Hoosiers – have taken to online crowdfunding websites like GoFundMe or IndieGoGo asking the public for money in order to gain access to – or foster support for – marijuana, which is still an illegal drug in most states.

Purdue University bio-engineering student Chris Thompson is among them. His GoFundMe page seeks to raise $5,000.

As of May 18, he had garnered more than $3,500. Thompson told donors he plans to use the money for living expenses during an unpaid internship this summer in Colorado working with NORML, or the National Organization for the Reform of Marijuana Laws.

During a lengthy interview, Thompson said his arrest for marijuana possession while at Purdue inspired him to help start a local NORML chapter on Purdue’s campus, which is now a university-approved club with faculty advisers. He has also since helped start local chapters at Indiana University and Ball State University.

“(My) kind of dream is to be – or create the kind of Budweiser or the Coca-Cola of the cannabis industry,” Thompson said.

Thompson denied that he currently uses marijuana, saying “he didn’t want to risk it.” He did acknowledge the irony of his position and the fact that his room is filled with posters, news articles and bumper stickers indicating he does support legalization.

“I’d like to see full medical and recreational legalization all over the country,” Thompson said.

I-Team 8 reached out to GoFundMe officials to ask about its policies with respect to public donations for illegal substances, but our email was not returned.LAWMAKERS’ EFFORTS FALL FLAT

Indiana State Sen. Karen Tallian, D-District 4, has sponsored marijuana legislation in the Indiana Statehouse before. This spring, a bill she sponsored that would have legalized medical marijuana in Indiana died in committee.

In fact, four other bills (SB 284, HB 1487, HB 1387, SB 485) that sought to expand access to either medical marijuana or cannabis oil died in the Indiana legislature without a committee hearing, according to state legislature records reviewed by I-Team 8.

Tallian claims there is support among her colleagues, even if the roll calls don’t indicate it.

“We just haven’t given (lawmakers) an opportunity to vote on it because the gatekeepers say ‘no,’” Tallian said.

Tallian, who announced weeks after her interview with I-Team 8 that she wanted to run for governor, said that many lawmakers need to become “more comfortable” talking about marijuana if any bill is going to advance in the Republican-controlled legislature.

“I graduated in 1968 from the University of Chicago where if you weren’t smoking pot… well, everybody smoked pot. And those people are not junkies today,” Tallian said, adding that many of her former classmates were in prominent business positions and positions of power.DATA OUT OF COLORADO ‘NOT GOOD’

“There always should be great concern when you want to legalize another intoxicant or substance that can be more available,” Powell told I-Team 8.

Powell admits he doesn’t have to lobby hard against pro-marijuana bills given that Indiana is a conservative state.

“There will be a price paid if we legalize marijuana, paid by individuals who misuse it or take it by mistake. We have to decide if we are willing to deal with that,” Powell said. “I think it is wise to watch our neighbors and see what the consequences are before taking any action.

Our laws are good tools in Indiana. We know how to use them. And just because you buy your pot in Colorado and sneak it home or you get some pot out of Michigan doesn’t mean we can’t prosecute you for it.”

The group’s study, entitled “The Legalization of Marijuana in Colorado: The Impact” is available online and points to statistics that Colorado’s legalization of both recreational and medical marijuana has led to increases in impaired driving, children and pets being exposed to marijuana edibles and increased drug-related suspensions and expulsions from schools.

“If you look at the data coming out of Colorado especially on children and pets, it’s not good in terms of marijuana legalization,” Powell said.ACCESS INCREASING

A four-year medical marijuana pilot program is underway in Illinois.

While the state’s process has been highly regulated, even cannabis advocates like Feliza Castro argue that’s not “a bad thing.”

“We want to help get those patients access to medical cannabis because they want it and they need it. They deserve it.”

Castro is the founder and owner of the The Healing Clinic, one of a growing number of clinics popping up in the Chicago area. So far, Castro says she’s registered nearly 200 patients for their medical marijuana cards.

State-approved dispensaries and marijuana cultivators are not yet fully operational and likely won’t be until the late fall of 2015 or early next year, she says.

“It’s very important for patients to get registered right now, especially because the Illinois Department of Public Health has created a division of medical cannabis to handle patient application, to get patients through the application process, to approve patients,” Castro said.

Earlier this month, a state regulatory board in Illinois approved the use of the medical marijuana for 11 diseases and conditions, but those conditions still need to be approved by the state health director.

The website for the Illinois Department of Public Health notes:

A list of additional resources can be found here.

But seeking medical marijuana still comes with a risk, according to both advocates and opponents. Transporting the marijuana would be considered illegal – especially in a state like Indiana where both recreational and medicinal marijuana remain illegal, Powell said.

Despite the current delay in access to medical marijuana in her states, Castro believes that her clientele base will grow.

“We assume that there will be people uprooting from Indiana and moving to Illinois seeking medical cannabis. And we want to let people know that we are there to help those people, and that we want to help get those patients access to medical cannabis because they want it and they need it. They deserve it,” Castro said.HOOSIER SURVEY

In a 2013 Hoosier Survey conducted by WISH-TV and Ball State University, 53 percent of Hoosiers supported decriminalizing marijuana by making it legal to hold small quantities. The survey also found that Hoosiers support regulating the substance like alcohol or tobacco by a margin of 52 to 45 percent.

Politically, 64 percent of Democrats polled were in favor of this, but even Republican showed support at 49 percent, the survey found.

When the question was posed as to whether Indiana should tax marijuana like cigarettes, support rose to 78 percent among all Hoosiers, with virtually no variation between political parties.

DEA officals told I-Team 8 that the agency was not as concerned with Indiana residents seeking money online to gain access to marijuana or transporting it out of state because the DEA’s top priority remains combating the transport of harder drugs like heroin and prescription narcotics.

An Indiana State Police spokesman declined to be interviewed on camera for this report. But when asked if state police had taken any precautions or considerations in light of the increased access to marijuana in Illinois and Michigan, the spokesman said, “no” adding that the drug still remains illegal in Indiana despite changes to laws in other states.GUINEA PIG

Jennifer Perkins admits she’s tried marijuana before, but doesn’t consider herself a user. But during her initial lengthy interview with I-Team 8 in April, Perkins says she was willing to be a “guinea pig” if it would help quell her seizures.

“I can’t say that I haven’t because in the past I have, but it’s been a while. I don’t want to do it now because Indiana is a state that you can’t do it. I don’t want to take a chance of being in jail,” Perkins said.

As of May 19, Perkins and her husband, Aaron, had posted updates to her Facebook page, including a video of her trying cannabis oil in Oregon.

The headline above the video reads: “My first dosage to help my seizures…”