Horror in Japan as video purports to show hostage beheaded 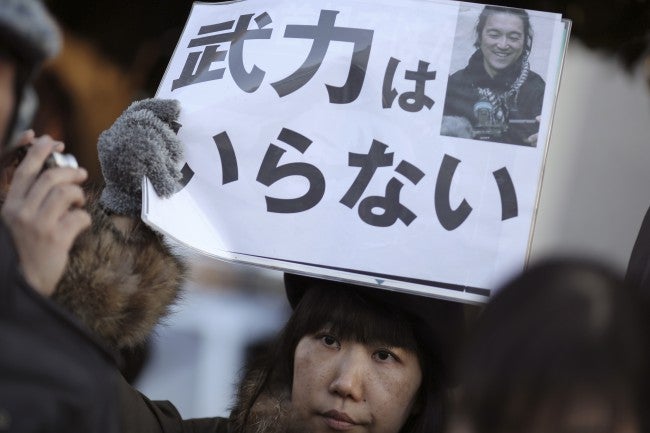 The failure to save Goto raised fears for the life of a Jordanian fighter pilot also held by the militant group that controls about a third of both Syria and Iraq. Unlike some earlier messages delivered in the crisis, the video that circulated online late Saturday purporting to show a militant beheading Goto did not mention the pilot.

The slaying of Goto, a freelance reporter whose work focused on refugees, children and other victims of war, shocked this country, which until now had not become directly embroiled in the fight against the militants.

“I feel indignation over this immoral and heinous act of terrorism,” Prime Minister Shinzo Abe told reporters after convening an emergency Cabinet meeting.

“When I think of the grief of his family, I am left speechless,” he said. “We are filled with deep regret.”

Threats from the Islamic State group prompted an order for tighter security at airports and at Japanese facilities overseas, such as embassies and schools, government spokesman Yoshihide Suga said.

He said it would be “inappropriate” to comment on the status of the Jordanian pilot, Lt. Muath al-Kaseasbeh. He was captured in December when his F-16 crashed near the de facto capital of the Islamic State group.

Jordan’s government spokesman, Mohammed al-Momani, also declined comment. Earlier this week, Jordan offered to free an al-Qaida prisoner for the pilot, but demanded and said it never got proof he was alive.

With no updates for days, al-Kaseasbeh’s family appealed to the government for information on his situation. But for Goto’s family and friends, the beheading shattered any hopes for his rescue.

“I was hoping Kenji might be able to come home,” said Goto’s brother, Junichi Goto, in a separate interview. “I was hoping he would return and thank everyone for his rescue, but that’s impossible, and I’m bitterly disappointed.”

According to his friends and family, Goto traveled to Syria in late October to try to save Haruna Yukawa, 42, who was taken hostage in August and who was shown as purportedly killed in an earlier video.

“He was kind and he was brave,” said Yukawa’s father Shoichi. “He tried to save my son.”

“It’s utterly heartbreaking,” he said, crying and shaking. “People killing other people – it’s so deplorable. How can this be happening?”

Abe vowed to continue providing humanitarian aid to countries fighting the Islamic State extremists. Bowing to terrorist intimidation would prevent Japan from providing medical assistance and other aid it views as necessary for helping to restore stability in the region, he and other officials say.

But the government spokesman, Suga, said Abe would not link the hostage crisis to his efforts to expand Japan’s military role in “collective self-defense” with the U.S. and other allies.

The White House released a statement in which President Barack Obama also condemned “the heinous murder” and praised Goto’s reporting, saying he “courageously sought to convey the plight of the Syrian people to the outside world.”

The White House said that while it isn’t confirming the authenticity of the video itself, it has confirmed that Goto has been slain.

Though it could not be immediately independently verified by The Associated Press, it conformed to other beheading videos by the group.

A few dozen people, bundled up against a biting wind, gathered in front of Abe’s official residence Sunday afternoon to show their sympathy for the hostages.

“I feel so sad and angry. Why didn’t the government rescue Kenji?” said Mayuko Tamura, 31, a pediatrician who came with her husband and their 8-month-old baby.

In a Sunday service at the church Goto sometimes attended, worshippers prayed and commemorated his life.

“I feel as sad as I did when my own son passed away,” said Atsuko Miyakawa, an 89-year-old housewife. “I cried all day long yesterday.”

In Jordan late Saturday night, relatives and supporters of the pilot held a candlelit vigil inside a family home in Karak, al-Kaseasbeh’s hometown in southern Jordan.

We “decided to hold this protest to remind the Jordanian government of the issue of the imprisoned pilot Muath al-Kaseasbeh,” said the pilot’s brother Jawdat al-Kaseasbeh, holding picture of Muath with a caption: “We are all Muath.”

“We want to know how the negotiations are going … in a positive direction or not. And we want the family to be (involved) in the course of negotiations,” he said.

Japan’s envoy to Amman for the hostage crisis refused comment on details of what happened and said he was waiting for further orders from Tokyo.

Jordan and Japan had reportedly conducted indirect negotiations with the militants through Iraqi tribal leaders, but late on Friday the Japanese deputy foreign minister reported a deadlock in those efforts.

The hostage drama began last week when the militants threatened to kill Goto and Yukawa in 72 hours unless Japan paid $200 million.

Later, the militants’ demand shifted to seeking the release of 44-year-old Sajijda al-Rishawi, who is facing death by hanging in Jordan for her role in triple hotel bombings in Amman in 2005. Sixty people were killed in those attacks, the worst terror attack in Jordan’s history.

The deadline for that exchange passed without word, leaving the families of the pilot and journalist waiting in agony. Al-Rishawi has close family ties to the Iraq branch of al-Qaida, a precursor of the Islamic State group.