Hospital reports increase in opioid babies, decrease in heroin use 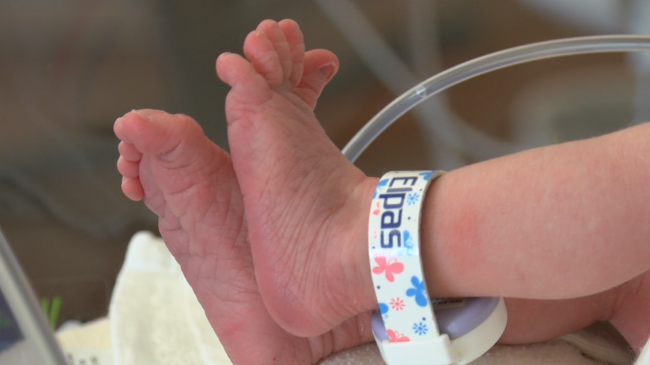 RICHMOND, Ind. (WISH) — Reid Health hospital administrators report an increase in opioid-dependent babies born in their hospital in 2017, but say significantly less are addicted to street drugs like heroin.

In 2015 Reid Health, reported 54 neonatal abstinence syndrome (NAS) babies were born in their facility, referring to infants who had received enough opioids through their mother via umbilical cord to develop a physical dependence on the drug. Reid Health reports that number increased to 58 in 2016, and as of November 1, 2017, administrators report 84 babies had NAS.

“These mothers feel very guilty. Very guilty about what’s happened. Sometimes I don’t know that everybody really understands that part of it.”

Callahan explained babies receive doses of morphine and are rocked for days or weeks during their withdrawal period by a team of volunteer “baby rockers.”

“You just keep thinking, if I can help in some small way, and rocking is it,” said Becky Jewison, director of volunteer services. “But you want to help so badly to get rid of it.”

While Reid Health hasn’t gotten rid of the opioid problem in their area, administrators say the game is changing for the better.

“The last four months we’ve had zero positive tests for heroin,” said Lisa Suttle, director of strategic initiatives for community and psychiatric services. “We are seeing that mothers coming in are testing positive for suboxone and methadone, which is medication-assisted treatment. That makes us feel better because usually they’re in some type of treatment and there’s oversight being provided for those medications.”

While Suttle admits you can get suboxone and methodone on the streets, she says they are powerful tools in combating heroin addictions.

“These mothers feel very guilty. Very guilty about what’s happened. Sometimes I don’t know that everybody really understands that part of it,” said Suttle. “I had the opportunity this past summer to work with a mother who was taking methadone and with the help of the Richmond Treatment Center, we weaned her off the methadone and got her to a place where she was not using opioids.”

Jewison adds she hasn’t called in a baby rocker volunteer since August.

“As much as they absolutely love rocking, they understand and are so pleased maybe when they’re not needed,” smiled Jewison.

Suttle says a mother recovering from an opioid addiction is often approved to rock her baby herself, once nurses determine a low risk of falls or other dangers to the newborn.

“That bonding is very important for the mother and the baby. And I say that specifically for these mothers too. Sometimes people think that’s not important to them — it’s at the top of their list,” Suttle said.

“I think getting the word out preventatively is helping. And seeing these moms or even women in a treatment center, being proactive about birth control and working on those things I think have really helped,” said Callahan.

“Letting the mothers know there are other methods of treatment that we can help them with,” adds Suttle. “Not just automatically telling them they need to go cold turkey or there’s nothing that we can do to help you. Many times that keeps a mother using heroin.”

“Once they deliver then our goal is to be able to wean them off the suboxone or methadone,” said Suttle. “We’re partnering with our community mental health centers in our area, Centerstone and Meridian, and then all of the agencies that can help that mother with food, shelter, clothing, child care, work opportunities. All of those things.”