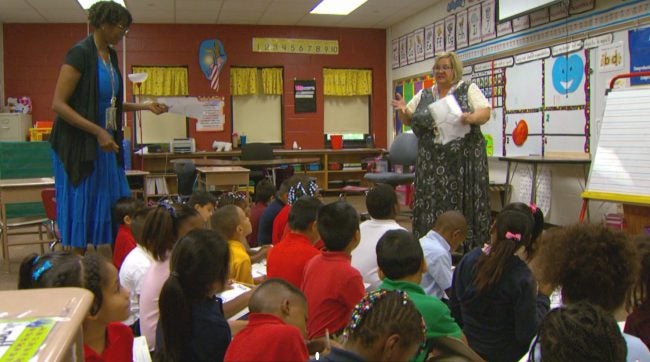 INDIANAPOLIS (WISH) – A fight is happening in Congress concerning what children eat at school and Indiana is at the center of it.

House Bill 5003, the Improving Child Nutrition and Education Act of 2016, is a 180 page bill that expands the Summer Servings program and loosens nutrition standards for school breakfast and lunch, among other changes.

The bill also contains a change in the federally funded Fresh Fruit and Vegetable Program (FFVP). The change, which takes less than one page, takes the word “fresh” out of the program and replaces it with “all forms” of produce including canned, frozen, dried and pureed produce instead.

Health advocates argue the bill and many of its changes would reverse the progress made in the 2010 Healthy, Hunger-Free Kids Act.

FFVP first launched in 2002 in four pilot states, including Indiana. Since then, the program has expanded to all 50 states and grown to $184 million in funding. Indiana receives $3,685,494 of that to provide healthy snacks to the most disadvantaged students.

The fresh snacks come in two ounce servings. Through the program, children are exposed to some of the more common fresh produce like apples and oranges, as well as some of the less widely eaten produce like jicama, radishes, turnips and bell peppers.

The program’s goal is to improve children’s overall diet, provide healthier snack choices, expand the variety of fruits and vegetables children are exposed to and increase children’s fruit and vegetable consumption.

Schools are eligible for FFVP based on how many students qualify for Free & Reduced Lunch. According to the USDA, more than 29 million children in the U.S. were approved for free and reduced meals through the National School Lunch Program;  551,000 Indiana students were approved.

The Indiana State Department of Education then ranks each school to reveal the most impoverished student populations. This school year, 119 Indiana schools with 57,149 students are able to offer FFVP after the state received more than $3.6 million in federal funding.

Every day, thousands of fruits and vegetables are sliced and packaged at Indianapolis Fruit, 4501 Massachusetts Avenue, one of the Midwest’s largest produce distributors. Daily, hundreds of employees prepare the individual two ounce servings taken to the nearby IPS Food Service Center, 4125 N Producers Lane, where it is housed in a refrigerated room to be delivered each night to schools within the district.

The following morning, students are given the fresh produce at 9:30 a.m. or 1 p.m. as a separate snack from breakfast or lunch.

“Sometimes we try jicama, and we had radishes,” says a teacher at Floro Torrence School 83. “We’ve had green peppers.”

Teachers often incorporate the snack into the lesson plan as they teach the history or origin of the produce.

“Many of our students rely on the local Dollar General or the local Family Dollar for food because there isn’t a grocery store in their community or their neighborhood that offers fresh fruits and vegetables,” says IPS Superintendent Dr. Lewis Ferebee.

“I had a student ask me what a cauliflower item was when it was on their tray,” says Ferebee. “They had never experienced cauliflower. So, the notion that we’re giving students healthy foods, but also building healthy habits for eating healthy food beyond school is a great benefit to this program.”

“It’s our responsibility, if we can, to remove that barrier so students aren’t thinking about when their next healthy meal is coming from,” says Ferebee.

Indiana 4th Congressional District Representative Todd Rokita (R) has proposed a change to FFVP within his reauthorization bill which passed through the Subcommittee on Early Childhood, Elementary and Secondary Education.

The change strikes the word “fresh” from the official name of the Fresh Fruit and Vegetable Program and removes the requirement to serve fresh produce at snack time. The bill instead allows “all forms” of produce, including frozen, canned, dried and pureed.

Several studies have looked into the Fresh Fruit and Vegetable Program and its impact on the consumption of vegetables, but only one has studied the program’s impact on obesity rates. That study from the University of Arkansas showed a 15 percent reduction in overall obesity rates for children where FFVP was offered.

Researchers noted that the cost to facilitate the program per child was between $50 – $75 and went as far to say the results also suggest that relatively small improvements in the diets of at-risk children can translate into meaningful health improvements.

In an interview with the Indianapolis Star, Rep. Rokita is quoted as pushing for canned and frozen foods to take the place of the fresh produce provided to low-income students in Marion County. In the story, Rokita explicitly advocated for tomato processor Red Gold

Since 2011, Red Gold has secured $47.3 million dollars from contracts with the USDA, according to government contract tracker GovTribe. A change to the Fresh Fruit and Vegetable Program could make that amount go even higher.The difference in fresh and processed produce

All produce isn’t created equal. According to Community Health Dietitian Erin Coleman, the most nutritious produce is the type you grow in your garden or buy at the Farmer’s Market because it is often picked at the peak of ripeness.

“It’s the heat process, that’s where you’re going to start to lose the nutrients,” says Coleman. “Actually with canned produce — like corn and green beans — there’s salt and sometimes sugar is added. Those aren’t needed for preservation. Those are strictly added for flavor.”

As for the bill that could change the Fresh Fruit and Vegetable Program, Rep. Rokita says it should go to a vote before the end of the year.Rokita responds

What I said during the interview that was aired this morning, and what WISH chose not to publish, was that I am grateful for the support from literally thousands of Hoosiers, including the many employees at Red Gold and other Indiana companies. Red Gold employees make up only 0.1% percent of my campaign’s total donations. As subcommittee chairman with jurisdiction over child nutrition, I take my legislative duties very seriously, and have a good record of success, including the Every Student Succeeds Act that has been signed into law. Successful legislative efforts require collaboration and hearing from all stakeholders. This bill was the product of multiple public hearings and addresses many of the concerns that were raised, including the all forms language. So, the idea that this legislation is the result of any one special interest is laughable.”