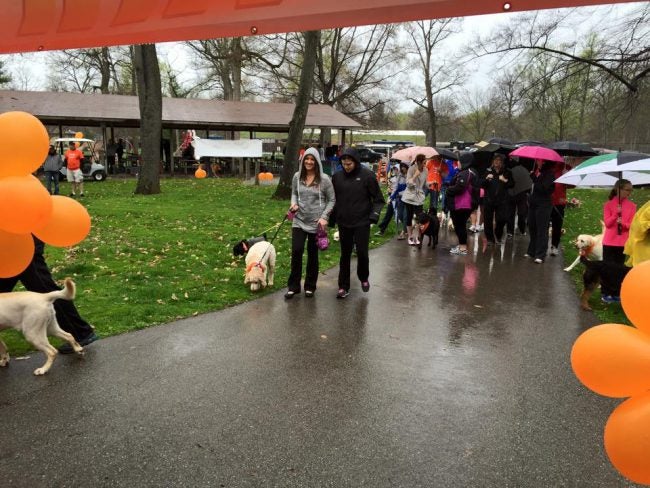 Clauson crashed in August, and died days later. “We’ve felt him a lot in the past five months,” Bryan’s mom Diana Clauson said.

Clauson drove at the Indianapolis Motor Speedway, and dirt tracks across the country. Now, his mom turns to photos for comfort.

“A lot of good memories,” Diana Clauson said. While he’s forever tied to racing, that wasn’t his only passion. Bryan loved his two dogs, especially, Chevy.

His animal love turned to charity three years ago when he launched a dog walk. “Bryan had a dear friend in Noblesville that he graduated with that lost his life to due to cancer,” Diana Clauson said.

Despite his death, the walk will go on in April. “We’ve decided to call it walking to save lives,” Diana Clauson said.

Because Clauson donated his organs, the focus will be on that cause. “We all said we would love the money raised to go the Indiana donor network, who has adopted our family,” Diana Clauson said.

Not only through morale support. Bryan’s sister, Taylor, took a job with the agency after his death.

“I get to come to work every day and honor my brother,” Bryan’s sister Taylor Mclean said.

A tribute not only found in the upcoming walk, but the network’s race campaign, “Driven2SaveLives.” An effort to raise organ donation awareness at races.

“We want to give as much as we can,” Mclean said. “That’s what Brian was all about.”

Now his family hopes others will help in his name. After the dog walk raised $25,000 last year, the family hopes to double it this year.

If you’re not able to make it, the event still has a way to show support. “Part of the registration that’s going to be called the, “lazy dog,” Diana Clauson said. “You can go onto the registration website and just put a donation amount on there.”

While Clauson’s family is excited about the dog walk changes, mom isn’t so sure it would be enough to replace his favorite spring event.

“That’s a tough question,” Diana Clauson said. “He loved his race cars, so I’ll probably say the Indy 500. He loved that place. He called it Disneyland.”

But she knows he’ll be proud of this walk as well. The walk will take place at Noblesville’s Forest Park at the end of April. More information will be made available soon.