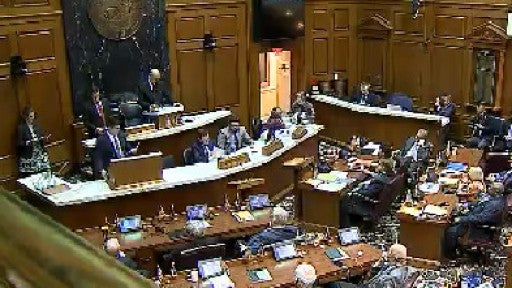 The task now turns to what these newly passed bills mean for Hoosiers.

On its way to Gov. Eric Holcomb, the GOP’s massive multibillion-dollar state budget. In it, the Department of Child Services gets millions over the next two years.

State Sen. Rod Bray, the Senate President Pro Tempore said, “Trying to, 1., Fund them, 2., Build in some accountability and help that department to begin to chart its course.”

Republicans also stressed the budget deal was the best way to send more money to schools and straight into teacher pockets.

“One guarantee: It will go to teachers is the TAG grants, teacher appreciation grants. We know that those specifically work.” Bray said.

Democrats aren’t so sure.

“I would’ve favored something that said, ‘Here are the dollars,'” Minority Senate Floor Leader Tim Lanane said Thursday. “You can have them. But, you can only have them to make sure that teachers are paid more in your school districts. Maybe allow them decide how to do that.”

If signed into law, Hoosiers could bet on their favorite sports teams, maybe as soon as this fall.

“If we’re going to be in this industry, and we’re in it, we have to be able to compete with the surrounding states,” said state Rep. Phil GiaQuinta, the House Democratic Leader.