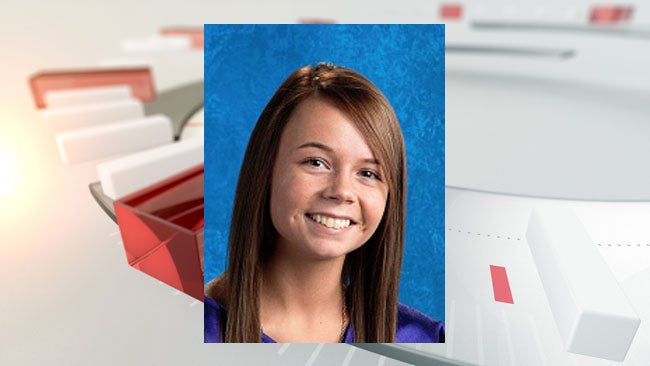 18-year-old Savannah Bettis died Thursday when the car she was in went off the road along Ronald Reagan Parkway near Rockville Road in Avon. Police said the driver, 20-year-old Jesse Hurt was taken to the hospital with minor injuries.

The crash site is where dozens have spent the day grieving and remembering Savannah.

Investigators are still working on what exactly caused the crash to happen, but one thing was clear Friday night: Samantha Bettis will truly be missed.

“She could brighten up a room just by smiling, she was beautiful,” said friend Ashley Rosenkrans. She was one of dozens of students who went to the crash site Friday afternoon.

Savannah’s friends describe her as an angel, one that was taken away too soon.

“I still don’t believe it,” Rosenkrans said. “I probably won’t believe it until I see her and it just, I don’t know, it’s not time for her to go.”

Savannah was just finishing up her senior year at Ben Davis High School and was only two weeks away from her graduation.

“Just surreal,” said friend and co-worker Dontre Graves. “I’m still trying to comprehend how and why what happened to such a sweet and nice person like Savannah.”

And that’s what investigators are trying to do. All they can say at this point was the car she was in left the the road on Ronald Reagan Parkway. Hurt survived but not Savannah.

“I couldn’t believe it at first and then I drove straight to McAllister’s (Deli) and that’s where I found out that it was true and it just crushed me,” said Graves. The restaurant is where he worked with Savannah.

“She was an angel,” said Mike Gillikin, assistant manager. “She was this little bitty girl who played like a big girl and was one of the best employees that we had.”

So little she even stood on a stool to help customers. The stool now stands alone as a memorial to her, covered in signatures, sayings, and on display for all of the customers to see.

“We had such wonderful hopes about what she was going to be when she grew up and we saw her ready to go do that,” said Gillikin.

Gillikin said Savannah wanted to be a teacher, someone who would enrich peoples lives.

“No matter how bad her day was, she was going to ask you how your day was and if you were okay,” added Graves.

Today, her friends were not okay. And the person, Savannah, who could have brought a smile to their face is the one who sadly is no longer there.

“I lost one of my close friends so it just really crushes me,” said Graves.

Savannah was the complete definition of the saying ‘short, sweet and to the point.’ Short, because she was no taller than 4’11”, but the confidence she had made her ten feet tall & bullet proof. Sweet, because there was never a day where Savannah never had a smile on her face, even on the hardest of days. To the point, because Savannah would tell you exactly how it is, without hesitation. She was the most honest person, always telling people how it is, but always reminding them how much she loved them.”

We reached out to Savannah’s parents but they were too emotionally and physically exhausted to talk.

Besides the vigil, family and friends have found more ways to honor Savannah.

Bracelets with #SavannahStrong on them will be sold at the McAllister’s in Avon , where she worked. They’ll be on sale from 1 p.m. to 3 p.m. Sunday.

Many students were tweeting in remembrance of Bettis:

R.I.P savannah Bettis your with the Angels now so young but God picks the most beautiful souls #CLAOtt15 you won’t be forgotten- Pharæøh Darè (@IAmPharaohDKB) June 5, 2015

I would definitely like to do something or wear something that represents Savannah Bettis on graduations in she will be there in spirits- May 30th♊️ (@Shawna_Dr) June 5, 2015