Hunter Johnson’s rise up the rankings 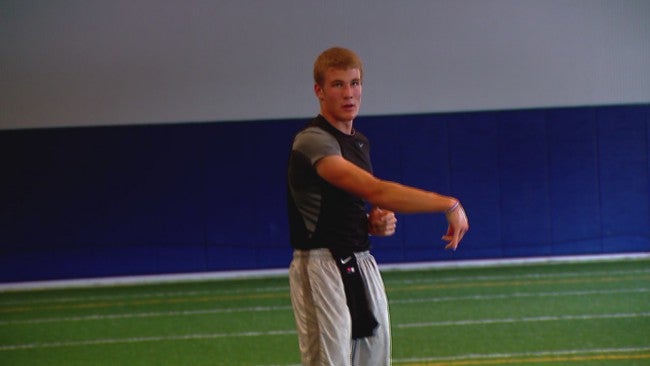 BROWNSBURG, Ind. (WISH) — 21 offers in all for Brownsburg quarterback Hunter Johnson. The 6’3″ junior is the country’s top pro-style quarterback for the class of 2017.

“When he stacks up against the other guys in the country, he’s proven that he’s worthy of the attention he’s getting,” said quarterbacks coach Levar Johnson.

Things started taking off for Hunter the summer after his freshman year, after an Elite 11 camp appearance, Rivals.com rated him the top quarterback in the country and it’s that rating that prompted getting a new letter almost daily from across the country.

“Right now, I’m calling quite a few coaches a week just to stay in touch and build relationships, which is what most want me to do right now. I’ll have nights where I’m calling eight coaches which sometimes can be a little stressful,” said Hunter Johnson.

While widely labelled as a pocket passer, his quarterbacks coach Levar Johnson, who has worked with guys in the NFL, thinks he’ll scare some people with his athleticism.

“I don’t even think he’s scratched the surface to be honest with you. I think he’s still learning things, but obviously his arm talent is as good as anybody that I’ve seen. He’s cerebral when working through his progressions. He can make every throw that you need to make on the field. He’s just a talented guy,” said Johnson.