I-69 back open after massive 20+ vehicle pile-up 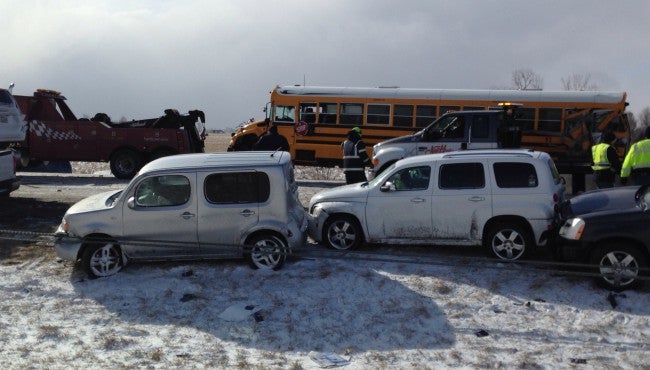 DELAWARE COUNTY, Ind. (WISH) – A multi-vehicle crash on northbound Interstate 69 in Delaware County shut down both directions of the interstate on Saturday.

The crash involved a school bus, five semis and more than 20 cars. It happened near State Road 28 and mile marker 248.

Preliminarily police say the school bus from Eastern Allen County ran into the back of a minivan. Other crashes then started happening as a result of that collision.

Fourteen students on the bus were taken to a local hospitals to be checked out for minor injuries. Six students weren’t hurt.

Three other people in the pile-up were hurt in the crash, but their injuries are believed to be non life-threatening.

The crashes are under investigation. Police say most of the collisions were the result of drivers following too closely or driving too fast in the unexpected white out conditions.