I-69 public hearings get underway 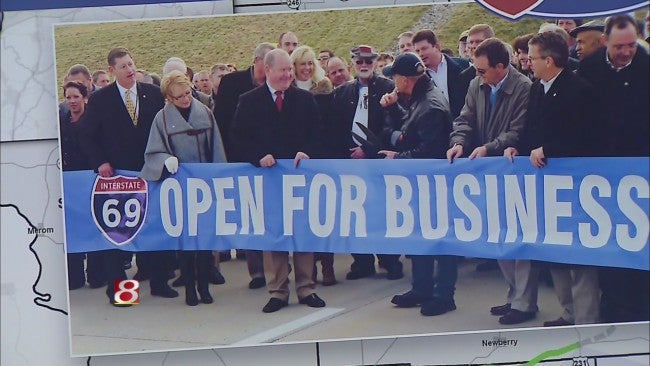 MARTINSVILLE, Ind. (WISH) – The first of two public meetings on the state’s expansion of Interstate 69 from Martinsville to Indianapolis got underway Monday evening at Center Grove High School.

It was a chance to weigh in on the final section of the expansion of the interstate from Evansville to Indianapolis.

About 200 people showed up.

According to INDOT, it’s still early in the game – State Road 37 was identified 10 years ago and it still remains to be seen if it’s the best route.

“Have there been increased homes and businesses that would be impacted? Are there other changed conditions we need to know about?” asked INDOT spokesperson Will Wingfield.

INDOT plans to hold several public hearings over the next two to three years on the route known as Section 6. The question, however, is it still the most likely route?

“We can say for certain that State Road 37 will be analyzed – it was the corridor identified in the tier one,” said Wingfield. “If there are changes or increased impacts, since the decision was issued in 2004, then we may look at corridors outside the alignment.”

Attendees received several handouts at the hearing, including a map of the 37 corridor route, with INDOT asking them if it works.

If the state sticks with the SR 37 corridor, what could the expanded roadway look like?

“When we develop a project we look decades into the future and then anticipate what the traffic demand is going to be and design towards that,” Wingfield said. “We haven’t run the traffic numbers yet to really say what we’ll do here but we’ll be anticipating future growth so we don’t need to come back in in short order and do additional work.”

Field work along SR 37 will start in the next few weeks. It’s part of an environmental review process.

“The condition of the soils, if there are any historical or archaeological resources and other types of field work to make sure that we minimize impacts not only to the human environment but also the natural environment,” Winfield said.

Some voiced concerns about the impact on homes along existing 37.

One woman said she was concerned about more pollution the interstate would cause in what she described as an already-polluted Perry Township in Marion County.

“Because it’s a good route,” he said. “It’s already there. Easy access.”

The entire process is expected to go through 2018, with no expected construction date able to be set until that step is complete. Funding for the project would not be determined until that time either.

A second hearing is scheduled for Wednesday at Martinsville High School. For more details on that hearing and how to send comments, click here.