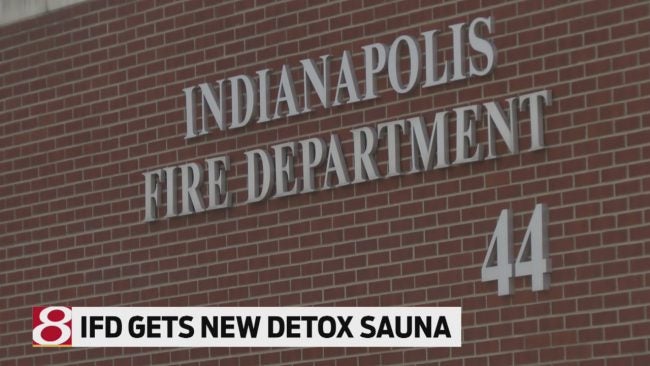 Fire Station 44 is now home to a Chemical Detox Sauna. The sauna helps firefighters sweat out the toxins they absorb with the goal of preventing cancer.

Firefighters return from fires and turn up the heat in the sauna. They then hop on a bike in the sauna to quickly work up a sweat.

“The heat will make you more fatigued more quickly and you’re probably already going to be fatigued coming back from a fire,” IFD engineer John Raker said.

Multiple studies show that firefighters are more likely to get cancer than the general population. One federally-funded study in 2013 from the National Institute for Occupational Safety and Health found the rate of mesothelioma is two times higher in firefighters.

The local firefighters union knows of at least 147 active or retired IFD firefighters who have or had cancer.

One firefighter on that list: Captain Tim McDonnell of Station 44. He’s a survivor who was diagnosed in 2000 with cancer in a nasal cavity.

“When your doctor looks at you and says you have cancer, your first thought in your mind is, I’m going to die,” McDonnell said. “I remember thinking, what am I going to tell my son? You’re thinking you have no tomorrow.”

McDonnell started with IFD in 1979-and he didn’t wear a mask back then.

Doctors couldn’t determine whether his job caused the cancer but McDonnell feels it contributed. It took eight months of treatment before he returned to work.

He said firefighters today are absorbing more toxins than ever due to synthetics used in furniture and flooring.

“When you crawl into that building, the only natural thing in there is you. Everything that’s in there, when it’s burning, that toxic smoke you’re in is going to be absorbed into your body.”

IFD Chief Ernest Malone reached out to McDonnell and other captains late last year, asking if they had ideas for special projects.

McDonnell, who for years has worked to reduce cancer in firefighters through various initiatives, pitched the idea for the $6,000 sauna. It was delivered to the station last month. The crew is noticing that it eliminates the smell that can sometimes stick with them for days after a fire.

The top goal for McDonnell?

“That nobody at this station ever gets that long face from the doctor and has to ask, how am I going to tell my family?”

IFD leaders will listen to feedback from Station 44 and then they’ll decide whether to get more saunas.

The Fire Department Instructor’s Conference-the largest fire conference in North America-will be in Indianapolis April 24-29. IFD will be there exploring more ways to prevent cancer.