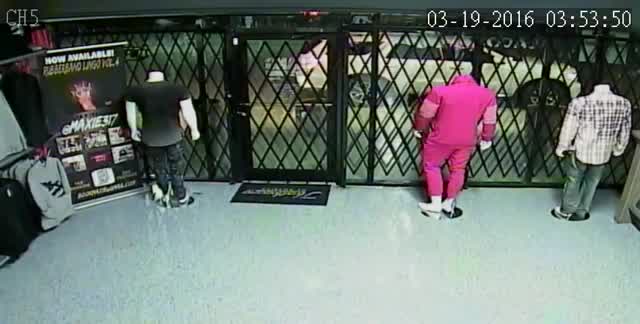 INDIANAPOLIS (WISH) — Police are investigating a “crash and grab” burglary that was caught on camera on the northwest side of Indianapolis.

Police are still working to find the group of thieves responsible. The store was gated, but the owner said that did not stop them from ramming a car through the front doors to get inside.

Surveillance video shows the driver in a white car accelerating into the store. Glass shattered everywhere with 10 to 12 people seen rushing trying to get pass the gate.

The driver puts the car in reverse, almost hurting the accomplices in between. Thieves got away with designer clothing worth thousands of dollars.

The store was opened for business Thursday evening with the front doors still boarded up.

Para Prince gets her nails done at a salon just a couple of doors down. She said this is the first time hearing about the crime.

“It’s extremely disappointing that when a business tries to take the proper security measures that people are actually risking their lives for a pair of what looked like blue jeans,” she said.

The Hang Time owner told 24-Hour News 8 off camera a pair of jeans in his store cost around $300. The damage is estimated at $50,000. He said that’s not including the merchandise.

The owner said detectives are trying to figure out if there’s a Chicago connection. Police in the Windy City have seen similar crimes in the past.