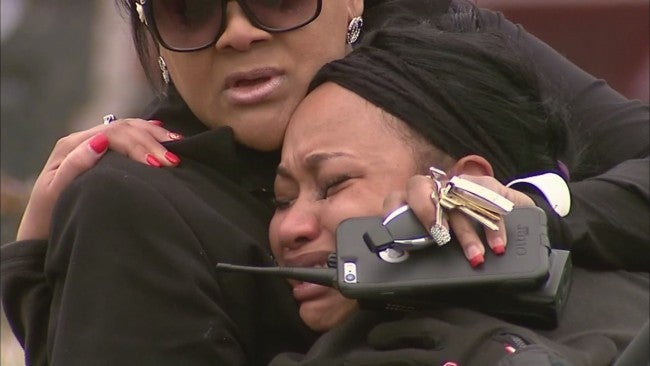 INDIANAPOLIS (WISH) — The investigation continues after police say four people were shot and killed inside of a home on the west side of Indianapolis.

It happened in the 3100 block of North Harding Tuesday morning.

Investigators say they found one of the victim’s cars abandoned on West 16th Street. They spent all day gathering evidence and talking to witnesses at the scene.

Family and friends of the four victims gathered behind the police tape, hoping for some answers as to why this happened.

They were standing together, holding hands and leaning into one another for comfort and support.

Police say a man and three women were found dead inside of the home.

“They didn’t just take one person’s life, they took a whole family. Not one person, not two, but three and four,” said a relative, who didn’t want to be identified on camera. “They took the whole family from everybody that was standing out here.”

The relative tells 24-Hour News 8 she rushed to the home after learning her two cousins and two aunts were inside.

Police say it all started around 9:30 a.m. when they received a call from the homeowner. The woman told police she found the bodies after coming home to find the side door kicked in and the place ransacked.

“Every now and then people have issues and challenges. We don’t believe this is random,” said Indianapolis Metropolitan Police Department Chief Rick Hite. “Again, this is not random. We need the public’s help.”

Police have released few details about the investigation. Relatives are praying that police will find who’s responsible for the crime and make an arrest.

“You took four innocent lives for no reason. All these people do is live and work hard for heir children everyday and for you to come in there to do someone like that,” said a relative.

Police have not released the identities of the victims. Police say an autopsy is scheduled for Wednesday.

Relatives tell 24-Hour News 8 one of the victim leaves behind three young children.

If you know anything about the crime you’re asked to call Crime Stoppers.